All I watch for Christmas 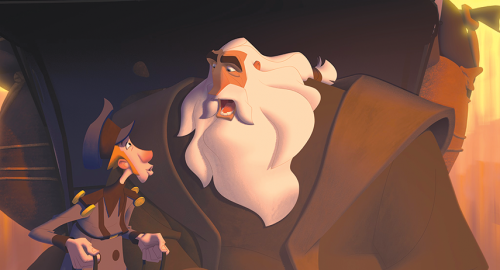 “Klaus” offers a wonderful animated celebration of the holidays. (photo courtesy of Netflix)

The TBS tradition of playing “A Christmas Story” for 24 hours straight is my idea of hell. That film will never become traditional viewing for me. If that’s your jam, more ode to joy for you.

My own preferences are a combo of familiar and, I assume, different, but I’ll let you decide. But each year, televisual and print media make an appearance in my household. Perhaps you’ll agree, check out some new things or stick to your Jimmy Stewart classics. Regardless, happy holidays.

‘All Through the House’

Saint Nick is much more creepy and gooey than the tales tell when two kids encounter the legendary figure on a Christmas Eve in this animated short in Netflix’s anthology series “Love, Death & Robots,” featuring robots, aliens, monsters, dystopian futures and horrific spins on the everyday, like this spooky Yuletide short parody that runs seven minutes but lingers in the mind a bit longer.

“Cotton-headed ninnymuggins” is still the best holiday-themed curse word, full stop. Add to that lines like “you sit on a throne of lies,” and the Will Ferrell-led “Elf” is a sure thing each year.

‘The Daily Show’ on white Santa

I use this each fall semester in courses I teach. The sequence is a splendid takedown of a Fox News-paneled debate hosted by Megyn Kelly on the prospect of “Black Santa” in response to a Slate opinion piece. Kelly’s all-white guests covered the historical Saint Nick, racial representation and what to do when “facts” make folks feel uncomfortable (you may now laugh).

Hilariously, then-“Daily Show” host Jon Stewart presents research on the historical Saint Nick’s likely appearance (not so white), along with a slew of other points that easily chip away at Kelly and her guests’ rants. It’s a wonderful reminder that the season should belong to more than a privileged, whiny bunch.

Christmas carols are say, dated, using lingo from another age. Like, what is “figgy pudding” in “We Wish You a Merry Christmas”? Luckily, Michael P. Spradlin’s “book of zombie Christmas carols,” as the subtitle makes plain, presents 30 undead takes on the classics with titles like “We Three Spleens,” “Slay Ride” and “I Saw Mommy Chewing Santa Claus.”

“Undead moan, are you listening?” Spradlin writes in an updated version of “Winder Wonderland.” “In the lane, blood is glistening. A horrible sight, we’re screaming tonight, runnin’ in a Zombie Wonderland.” Eyes roll amongst the family when I bust this one out on Christmas morn.

If you don’t know Rachel Bloom, the Golden Globe and Emmy-winning creator and star of “Crazy Ex-Girlfriend,” she made a name for herself on YouTube with an array of award-winning parody videos. Eight years ago, she contributed to the holiday comedy album “Suck It, Christmas,” including songs “Lonely Night,” “Happy Epic Channukah” and “What Would Hashem Do?”

Most songs are office friendly, but they all feature Bloom in all her crass, clever glory. The music video for “Chanukah Honey,” a parody of “Santa Baby,” is clean enough (though an R-rated version is out there too), showing us how Bloom began and what made others notice and let her run a show.

When Major General Waverly (Dean Jagger) arrives downstairs to a grand applause from his former soldiers, the effect is still poignant more than six decades after “White Christmas” premiered. Bing Crosby and Danny Kaye know their way around some timeless melodies, but they’re nothing without the chops, dancing and acting of co-stars Rosemary Clooney and Vera-Ellen. Put it all together for an enduring romp both nostalgic and always fun.

In this 2018 “SNL” sketch, Matt Damon and Cecily Strong, as a husband and wife, reflect on the events of the 25th, happy everything played out so memorably. Flashbacks chronicle a more traumatic experience: 5 a.m. abrupt start, screaming children with snotty noses and multiple rude relatives all only escaped by sneaking in a smoke break and shotgunning red wine. It’s too real. Way too real.

Very few animated films celebrate the holidays, which alone makes this Netflix feature special. Beyond filling a void, “Klaus” brims with joy and emotion, complemented by incredible animation worth revisiting over and over again. Prepare to cry.

For the past few years, this hilarious viral video has enjoyed a special place in my heart. I can’t even describe it without giving away anything. Just Google “An Arabic Christmas,” click on the first YouTube link and prepare to laugh during the most charming 49-second experience of the season.