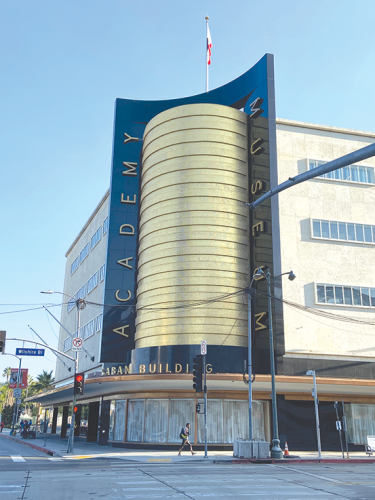 The Academy Museum is hosting a dynamic schedule of film screenings in the new year. (photo by Edwin Folven)

The Academy Museum of Motion Pictures will continue its calendar of film screenings and public programs that will take place in the museum’s David Geffen Theater, Ted Mann Theater and educational spaces in January.

Oscar Sundays, held every Sunday evening in the David Geffen Theater, celebrates films that have been honored at the Academy Awards. For the month of January, several screenings will explore films with the theme of homecoming.

In conjunction with the Academy Museum’s landmark exhibition Hayao Miyazaki, the museum will screen the Academy Award-winning filmmaker’s complete body of work as a feature director.

One of the cofounders of Studio Ghibli, along with director Isao Takahata and producer Toshio Suzuki, Miyazaki has forged a singular path as a storyteller. On Jan. 1, “Never-Ending Man: Hayao Miyazaki” will offer an intimate portrait of the director at work on a unique film project. All films will be screened in both the original language Japanese with English subtitles and the dubbed English dialogue versions (except where noted).

Every Saturday, the Academy Museum screens films for families of all ages. The final family matinee of every month is an accommodative screening where the museum offers open captioning, keeps the theater dimly lit and maintains a lower volume for neurodivergent viewers.

Branches of the Academy of Motion Picture Arts and Sciences represent distinct craft and professional areas of moviemaking. Working with members of Academy Branches, the Academy Museum is presenting a new weekly series: Branch Selects.

Each week, the series highlights a movie, presented chronologically from silent cinema to contemporary films, that represents a major achievement in the evolution of cinema and its unique crafts. In January, it kicks off the series with four titles from cinema’s first decades: Battleship Potemkin, Jan. 4; “The Adventures of Prince Achmed,” Jan. 11; “The Cameraman,” Jan. 18; and “King Kong,” Jan. 25.