You need to watch ‘The Expanse’ 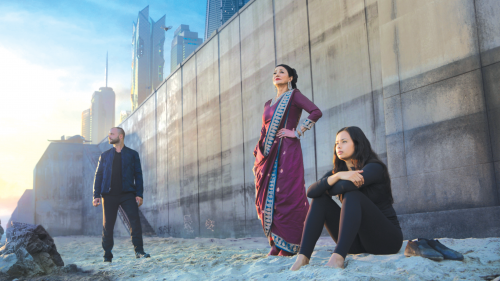 Before I pitch why you should watch “The Expanse,” a marvelous, complex sci-fi political thriller gearing up for season six’s Dec. 10 premiere, the show’s biggest fans set the groundwork for me. When “The Expanse” arrived in 2015, plenty of critics declared it the best sci-fi series in ages, a new generation’s “Battlestar Galactica.” (The Peabody-winning remake from the early 2000s, not the campy original).

It gradually developed a reputation as the best series nobody knew about. Syfy’s intricate sleeper hit involves an array of societies and cultures residing throughout the solar system.

Earth enjoys its central status a little too much, both for the life-giving resources it exports off world and the planet’s gravity, which makes its inhabitants stronger than those born on Mars or the colonies in the Belt. Various attacks transpire throughout the colonies and planets, a phantom foe pushing all parties closer to war.

Perhaps the premise felt too heady for uninitiated viewers as ratings slipped come season three, resulting in cancellation. Frankly a show like this might’ve sounded great for Syfy on paper, but fans of something like this cut their cable subscriptions long ago.

What happened after the announcement would be just as interesting as the show itself. The social media savvy first made viral appeals to all the streamers. Because “The Expanse” landed on Prime after each season – so far out that any viewing data wouldn’t impact the show’s broadcast fate – some diehards focused their energy on the most likely savior.

They mailed cakes to higher ups and even rented planes to fly over Amazon headquarters with banners that read “#SaveTheExpanse.” Noted author George R.R. Martin even wrote letters to various big-tech CEOs to pressure Jeff Bezos more directly. It worked.

The series continued for another two seasons, a third wrapping up a host of storylines soon. “Expanse” lovers aren’t supporting a carbon copy of “Star Trek.” Replace any semblance of optimism and the joys of exploration with a perverse opportunism that accompanies galactic colonization.

Think of what the future could practically look like if major companies like, perhaps Amazon, continue unchecked with R&D advancements that take advantage of vulnerable populations. Segregation and nationalism feed the tinders of strife.

But across this modest galaxy, a host of insiders and outcasts fight for change, some out of conviction, others by necessity. Traversing all space-faring territories is the crew of a salvaged Mars ship, the Rocinante. Earth-born James Holden (Steven Strait) captains a small crew including Belter engineer Naomi Nagata (Dominique Tipper), Earther mechanic Amos Burton (Wes Chatham) and Alex Kamal (Cas Anvar), a former Mars military pilot.

Upon surviving the targeted destruction of a shipping vessel, this crew goes on the run, but a desire to clear their names places them in the middle of several conflicts. An infectious protomolecule wipes out various crafts and colonies, but as the Rocinante crew uncover its mysteries, they must continue on to the next bread crumb, encountering homegrown terrorists, military fleets, Belters angry about their marginalization and what lies beyond the confines of the outer rim.

They aren’t without help though. Chrisjen Avasarala (Shohreh Aghdashloo), a political and military genius at the United Nations of Security Council, the governing body of Earth and Luna (a.k.a., our moon), knows the threat of force might fracture an already delicate peace everywhere. Her fluid role across several administrations often hinders her ability to influence change, but she remains “The Expanse’s” most compelling character, a raw voice of reason and stoic to a fault.

The Rocinante eventually encounters other unique characters as well, some who stick around. Joe Miller (Thomas Jane) first investigates a unique disappearance on the dwarf planet Ceres. His journey exits any film noir aesthetic rather quickly though. Then there’s Martian Marine Corps gunnery sergeant Bobbie Draper (Frankie Adams), whose chance encounter with an anomaly sends her face to face with Chrisjen.

While these and other characters serve as the series’ soul, the grand scope of the story and its interpretation of space life serve up their own delicious joys. Thanks to nine novels written by Daniel Abraham and Ty Franck under the pen name James S. A. Corey, the show makers develop a rich world that takes seriously the science of this science fiction. Wounds can’t heal in zero-g. Gravity can be a form of torture. And fast speeds in ships require all items be battened down and everyone given a special injection.

Across five seasons, “The Expanse” is a remarkable experience overflowing with cultural tensions, mystery, researched science fiction and, of course, visually stunning space action. Season six might be billed as the last, but the fans and authors might have something different to say about that. Let’s help them out and give this show the attention it rightly deserves.