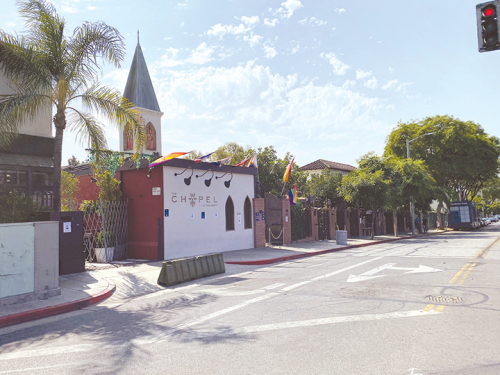 Two women claimed they were drugged at The Abbey Food and Bar in West Hollywood last summer. One victim said she no longer believes she was drugged, though both claims are still under investigation. (photo by Aaron Blevins )

Following several reports of unsafe environments within the city’s nightclubs and bars, the West Hollywood City Council on Nov. 15 took steps to ensure customer safety while visiting such establishments.

The council approved an ordinance to the city’s municipal code, which requires businesses that serve alcohol for on-site consumption post provided signs and mandate training on the safety and awareness of patrons who are consuming alcohol.

The ordinance comes after several reports were made to the West Hollywood Sheriff’s Station last summer claiming patrons of bars were drugged, with some victims saying they were subsequently sexually assaulted.

West Hollywood Sheriff’s Station Capt. Ed Ramirez said that from 2016 to 2021, the department has received approximately 30 reports in which victims believe their drink was spiked. Of those, three cases were filed with the District Attorney’s Office, and one is ongoing. The other cases, he said, were closed due to uncooperative victims or lack of information.

Through an Entertainment Policing Team, which is primarily focused on entertainment and alcohol-related law enforcement, the sheriff’s department patrols approximately 60 bars and nightclubs nightly.

“We continue to address nightlife safeties, especially pertinent to the reported drink spiking issues in some of our clubs,” Ramirez said. “Our officers and EPT have conducted a number of operations in an attempt to mitigate this issue, and there are a number of joint operations planned in the future.”

Still, council members said not enough is being done. The ordinance, which will require employees who serve alcohol to take training on the overuse of alcohol, will help ensure residents can feel safe while visiting nightclubs and bars, they said.

By July 1, 2022, employees who serve alcohol will have to complete responsible beverage service training through the California Department of Alcoholic Beverage Control.

The program will cost a minimum of $3 for each participant. In the past, the program was covered by the city, but following a change in state law, it will be provided by the ABC and paid for by an employer or participants.

Code compliance manager Danny Rivas said the ordinance will apply to all employees who have a hand in serving alcohol to patrons, including servers, service managers and bar security. It will not apply to managers who strictly handle administrative tasks or finances.

However, some business owners said they already offer responsible service training, while others said their business doesn’t need the training.

David Juarez, the director of local government of affairs for the California Restaurant Association, said that restaurants should be exempt from the ordinance because they offer a more controlled environment.

“The main reason why people visit restaurants is to sit and eat, to have a meal, as opposed to bars, clubs or any other entertainment venue, where the object is drink, to mingle and to interact with one another,” he said. “So, we believe that to be in a more controlled environment, that the training is not necessary for the restaurant sector.”

Rivas said the city ordinance was drafted based on state requirements, which include training for restaurants with a liquor license.

Aside from the alcohol training, staff will also undergo bystander intervention training in an effort to avoid situations in which patrons are drugged or sexually assaulted. The training will be conducted by the city or a city-contracted service provider free of cost to participants every 90 days.

Managers and alcohol servers must attend a training session by April 1, or within 90 days of employment, and every three years after.

Signage communicating the bystander intervention training to patrons will be required to be posted in all restrooms, at bar counters and in other conspicuous locations.

The city also developed a manual to be used as a training tool for owners and managers to maintain their establishments in a safe manner, a staff report states. It includes best practices to avoid drug sales, underage drinking, overconsumption of alcohol, violence, prostitution, sex offenses and terrorism.

The ordinance was approved with a unanimous 4-0 vote. Councilwoman Lindsey Horvath was not present.