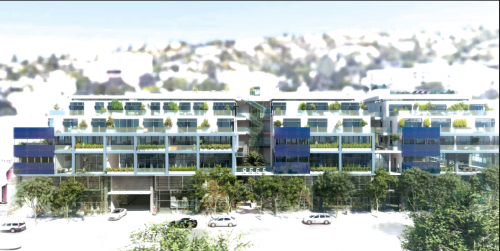 A proposed project would add 111 housing units and retail space at 8555 Santa Monica Blvd. (photo courtesy of the city of West Hollywood)

West Hollywood planning commissioners on Nov. 18 debated the potential impacts, including traffic and noise pollution, that could be caused by a proposed development at 8555 Santa Monica Blvd.

The proposed mixed-use development would include more than 100 residential units, as well as commercial space for restaurants, offices and a salon.

The project was originally heard by the Planning Commission in 2019, though no action was taken at the time and the project was continued to an uncertain date. Since then, the project site has been expanded, requiring a new draft environmental impact report, which outlines the impacts the project would have on the city should it be approved.

The development would be five stories above grade, rising 55 feet in height, and include two levels of subterranean parking, as well as a mezzanine level of parking.

The residential portion includes 111 apartment units, 17 of which would be designated as affordable housing, which Abundant Housing LA directors said in a letter to commissioners would help the city address its need for more housing.

“The greater Los Angeles region is facing a severe housing shortage, and this project is another step towards addressing the overwhelming need for more housing across Los Angeles,” the letter states. “By creating new housing in this neighborhood, it will help to reduce issues of gentrification and displacement in other parts of the region.”

Though commissioners said the addition of affordable units will benefit the city, some raised concerns about the potential impacts the project would bring to the neighborhood, particularly when considering the traffic associated with an increase in housing.

Commissioner Rogerio Carvalheiro said that although the draft EIR found any related traffic increase would have a “less than significant impact” on the area, the proposed development could cause backups along Santa Monica Boulevard as drivers attempt to turn into the complex.

The draft EIR states that vehicular access to the commercial portion and part of the residential portion of the development will be located off Santa Monica Boulevard.

“We know that Santa Monica Boulevard along that section needs to be addressed,” Carvalheiro said. “Crosswalks will need to change and the light, which is where the commercial entrance to this development is, will likely need to change.”

Carvalheiro also expressed concern that some drivers would access the property through West Knoll Drive, causing strain for residents who live along the road. In a letter to the commission, West Knoll Drive resident Linda Russ said traffic is already an issue.

“The traffic on this street now is dangerous and obtrusive, especially when all the Amazon deliveries, trash and recycle trucks are parked, blocking traffic going east and west,” she said. “Also, the 30-day move-in, move-outs that will take place on the first and 30th of each month will be overwhelming to all of us, causing complete gridlock.”

Though the report found the project would not have significant impacts to the city’s air quality, greenhouse gas emissions or aesthetics, one area that would see significant impact is noise while the property is under construction.

The study found the project will cause “significant and unavoidable” noise due to the potential for construction sounds to affect nearby residents and guests at the Ramada Plaza by Wyndham West Hollywood Hotel & Suites, said Karly Kaufman, a supervising planner at Rincon Consultants Inc.

Efforts to mitigate such noise could include 24-hour complaint signage posted on the property, prohibition of idling equipment, controlled level of workers’ radios and the construction of a sound barrier, according to the report. Commissioner Katrina Vinson said that should the project move forward, the city should mitigate as much noise as possible.

“We need noise mitigation for residents and the Ramada,” she said. “As long as this construction is going on right next door, it’s going to be really hard for them to run and keep a business.”

Residents have until Nov. 29 to make comments on the draft EIR. Comments can be emailed to lyelton@weho.org.

Commissioners will deliberate the merits of the proposal and decide whether to support or oppose the project at a future meeting.

‘Every day is Thanksgiving’ at nonprofit