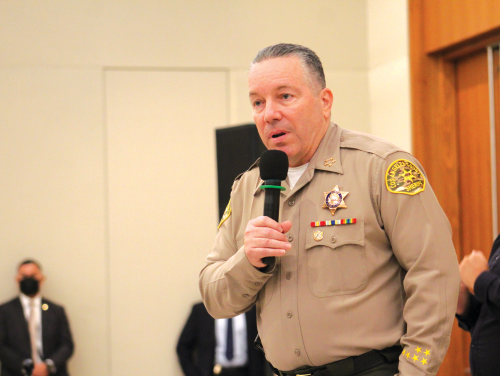 The West Hollywood City Council on Nov. 15 discussed the future of the city’s public safety department and what role the sheriff’s department may soon play.

As the city looks to expand its public safety services outside of the sheriff’s department, council members discussed reallocating some city funds from the department to support new services. Some called for a study to determine the feasibility of establishing the city’s own police department.

“I think we have a really incredible opportunity in the next few months to really reimagine community safety in a way that diverts funds that, quite frankly, the sheriff’s or a police department don’t need to have, because they’re doing things that they’re not experts in,” Mayor Pro Tempore Sepi Shyne said.

The West Hollywood Sheriff’s Station funds about 99 sworn deputies, and operates on an annual budget of approximately $19.8 million, according to a staff report.

Aside from the sheriff’s department, West Hollywood contracts with PacWest to provide security guards at the city’s public facilities and with Block by Block, a neighborhood services organization, to provide supplemental security ambassador patrols in the community.

On Monday, the City Council approved an expansion to the Block by Block program, which will add more ambassadors on the east side of the city, at an additional annual cost of $140,000. That brings the total annual cost to $2.2 million.

Additionally, the council approved the first phase of the development of a citywide Behavioral Health Crisis Unit that would act as an additional responder to help facilitate mental health care. The 24-hour unit would come with a $2.5 million to $4 million annual price tag.

Rather than pull funds from another portion of the budget, council members discussed reallocating funds from the sheriff’s department, particularly those that are used for homeless services, to be put toward the city’s new contracted services.

“I would like to take those services from the sheriff’s department that don’t want to do them – and that’s OK, they don’t have to do them – and invest it back into the new services we’re looking at,” Councilman John Erickson said.

In a previous interview with the Beverly Press/Park Labrea News, Lt. Bill Moulder said that should services, such as mental health calls, be handled by another contracted department, it would allow deputies to better address other service calls.

“It would free up more deputy personnel assets to address criminal issues and the protection of our community with more visibility and community patrols, such as additional foot beats and community interactive public safety,” he said.

However, some council members, following a recommendation from the city’s Public Safety Commission, requested staff put together a study to determine the feasibility and costs of developing a city-led police department. Shyne and Erickson both said they support the study.

The notion comes after council members expressed disdain for several sheriff’s department actions, including a lack of COVID-19 vaccination among deputies and reports that Sheriff Alex Villanueva is using a special unit to target his political enemies.

“We have whistleblowers, we have people saying things in the press, we have people talking to us, we have residents that call and say they can’t get the right amount of service,” Erickson said. “I can’t actually look at someone and say, ‘I know where all $20 million of your taxpayer dollars is going,’ and I find that deeply troubling.”

The public has also echoed that sentiment. In a city public safety survey conducted from Oct. 26 through Nov. 3, a majority of the 568 respondents ranked their satisfaction with the sheriff’s department’s service lower than in previous years.

Resident Zekiah Wright expressed support for police offers “that care about communities,” but said the current system is not working and should therefore be phased out.

“We’ve lived in a police state since the city was founded and find ourselves still feeling unsafe and are overwhelmed by the rise of new challenges,” Wright said. “Let’s meet these new challenges with new solutions. The City Council should activate more community alternatives to policing and have a bigger vision of what the city can be to create a better and safer WeHo.”

In a town hall meeting on Nov. 16, Villanueva said many municipalities began defunding their police departments at a cost to public safety.

“We could double the size of the sheriff’s department and we would not get to 2.0,” he said. “That’s how under-staffed we are and to think that we’re being defunded while we’re that understaffed is approaching criminal.”

At the City Council meeting, Councilman John D’Amico said he would like to see a different report on how all the city’s public safety dollars are spent.

“With this report that comes back to us, regarding what choices we might make in our next budget, I want to make sure that one of those choices is to have a robust public safety department that is tasked not just with managing contracts, but we’re looking forward in developing strategies for public safety that are fully encompassing of all our public safety options,” he said.

Mayor Lauren Meister said that although she is in favor of reallocating some funds to contracted services, dissolving the sheriff’s department is not a viable solution. Aside from the startup costs, she said the retirement and health care costs would add great expense to the city’s budget.

Meister said if the city takes away tasks the deputies are not trained to handle, the department will be better equipped to respond to other calls.

Erickson said the future of the city’s public safety is not a solution that will come overnight. Council members agreed to receive more information on how the sheriff’s department spends its budget and the feasibility of a city police department before proceeding.

*A previous version of this article stated that Councilman John D’Amico said the city could consider ending its contract with the sheriff’s department and instead establish its own police department. That was incorrect and the article has since been updated.*

‘Violins of Hope’ tugs the heartstrings