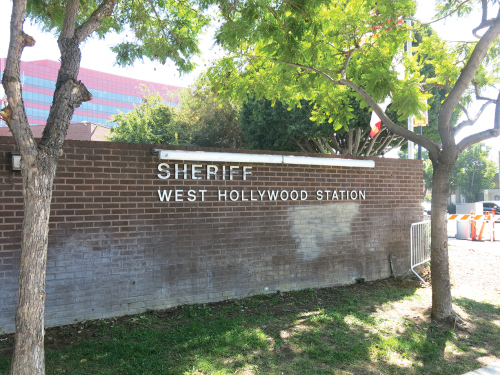 Los Angeles County Sheriff Alex Villanueva had a golden opportunity to address the city of West Hollywood’s lack of confidence in the sheriff’s department during a Town Hall meeting on Nov. 16, but he instead focused on several projects that don’t pertain specifically to the city.

A recent study conducted by West Hollywood shows that resident approval of the sheriff’s department has fallen from 77% in 2016 to 49% this year.

Rather than focus on efforts to improve public safety within city limits, during the town hall, for which Villanueva arrived 20 minutes late, the sheriff spoke for 40 minutes about the department’s homeless outreach efforts and how it plans to transition out of the pandemic.

The program allows individuals who have an intellectual, mental or physical disability to fill out a special form on the department’s website to share information about their diagnoses. That way, when a deputy is called to a situation, they will be alerted about how best to handle the call.

“We’re trying to be proactive,” Villanueva said. “We’re using information from past incidents to see how we can do a better job for the community.”

After the programmed presentation, the conversation turned to West Hollywood-specific issues as Villanueva fielded questions from a crowd of about 20 West Hollywood residents and business owners. No City Council members or other city officials were in attendance.

A majority of the community-led discussion was based on the department’s community policing, with many residents questioning why there aren’t more foot patrols in West Hollywood.

West Hollywood Sheriff’s Station Capt. Ed Ramirez said the department has funding to staff foot patrols about three days a week, focused mainly on the east and west sides of the city in the evenings.

Villanueva said that although foot patrols can be effective in crowded urban environments, they are not the most effective form of patrol because officers can only respond to calls for service that are immediately around them. They do not deploy more foot patrols, he said, because of limited staffing.

“I like foot patrols and they can be very effective … but with the very limited staffing model that we have, it makes it cost prohibitive,” he said.

Villanueva said the department does, however, offer more foot patrol deputies for large events, such as Pride, and he’d like to see more foot and bike patrols added in areas that are heavily populated by bars and nightclubs should the future budget allow it.

In addition to sheriff’s deputies, West Hollywood contracts with Block by Block for a community ambassador program in which ambassadors patrol certain areas of the city on foot or bike. Should the city want more sheriff’s deputies on foot patrol, Ramirez said, it would have to set aside additional funds.

In the past few months, many residents have raised concerns over a rise in crime and gun violence on Melrose Avenue, and Villanueva said that as the pandemic shifts to the “rearview mirror,” he’d like to focus more deputy attention on theft.

“You see it play out every day. Your favorite mom and pop store that you patronize, you may see they’re struggling because they can’t keep up with the theft that is going out the door, and we definitely have to find a way to get them help,” Villanueva said, though he did not directly mention a solution for West Hollywood.

At its Nov. 15 meeting, the West Hollywood City Council directed staff to work with the Public Safety Commission and the business community to develop measures to increase community safety on commercial streets, including developing a commercial public camera rebate program to allow businesses to install video systems in public areas.

Though he said individual efforts from the city and the sheriff’s department will be helpful, resident Victor Omelchenko said the greatest success would be achieved if the entities work in concert with each other.

Villanueva said that since the murder of George Floyd in 2020, it’s become popular to “bash” law enforcement, and defund police departments, which puts a strain on law enforcement officers.

“There’s this idea that law enforcement is the root cause of all ills of society, when actually, we’re the people trying to keep society safe,” he said.

Omelchenko said he’d like to see the department and the city put aside its differences to create a safer West Hollywood for residents.

“I’d love to see in the future, one stovepipe talking to the other,” he said. “I think with all the divisiveness and the controversy, we all need to start talking together and promoting safety better.”

You need to watch ‘The Expanse’