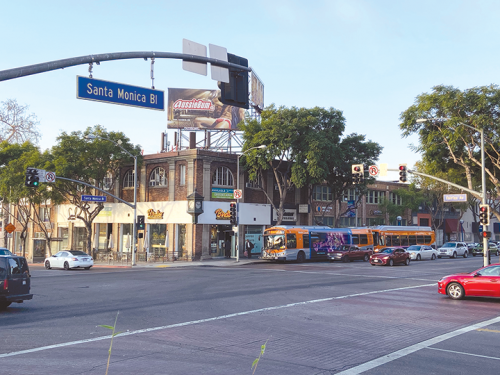 A suspect arrested for an allegedly unprovoked attack on a man on Nov. 15 was known to frequent the neighborhoods near Santa Monica Boulevard and Fairfax Avenue. (photo by Edwin Folven)

One suspect, David Cook, 44, was arrested on Nov. 21 and booked for attempted murder after allegedly stabbing a man on Nov. 15 in the 7800 block of Santa Monica Boulevard. The male suspect allegedly approached the victim, who had just left a nearby store, and attacked him, said Lt. Bill Moulder, with the West Hollywood Sheriff’s Station. The victim fell to the ground and the suspect got on top of him, pulled out a sharp object and stabbed the victim multiple times, he added. The suspect fled before deputies arrived. The victim was taken to a hospital and is expected to recover, Moulder said.

The suspect matched the description of a homeless man known to frequent the neighborhood around Santa Monica Boulevard and Fairfax Avenue. Sheriff’s department investigators issued a crime bulletin and notified police in neighboring jurisdictions as deputies searched for the assailant.

On Nov. 21, Los Angeles Police Department officers detained a man matching the suspect’s description near Beverly Boulevard and Martel Avenue. West Hollywood deputies were called and arrested Cook, who was booked for attempted murder and remains in custody on $1 million bail.

Moulder said another homeless man committed multiple crimes on Nov. 18 before being arrested near Santa Monica and La Cienega boulevards. He said the suspect is in his late 20s but declined to provide a name based on the ongoing investigation. Moulder said the suspect threatened two people and attempted to rob another between 8:30-11 p.m. All of the crimes occurred within a two-block radius of each other along Santa Monica Boulevard, he said.

The suspect first allegedly entered a business in the 8600 block of Santa Monica Boulevard shortly after 8 p.m. and confronted an employee. Moulder said the suspect pulled out a box cutter and threatened the victim. When the employee called 911, the suspect allegedly pulled the phone from the employee’s hand and fled. Deputies arrived but were unable to locate the suspect, he added.

At approximately 9:15 p.m., West Hollywood deputies received a 911 call about a suspect matching the description from the previous incident attempting to break into vehicles in a parking lot in the 8400 block of Santa Monica Boulevard. The male suspect allegedly threatened a security guard who intervened, and fled before deputies arrived, Moulder said.

Another victim called authorities at approximately 9:55 p.m. and said a male suspect attempted to rob him in the 8200 block of Santa Monica Boulevard. The victim yelled for help and the suspect fled on a scooter, Moulder said.

At approximately 10:50 p.m., deputies saw the suspect and attempted to detain him near Santa Monica and La Cienega boulevards. A foot pursuit occurred and the man was taken into custody a short distance away, Moulder added. The three victims later identified the man as being involved in each incident, he said.

Moulder said investigators are in the process of reviewing security camera footage and interviewing witnesses before presenting the case to the Los Angeles County District Attorney’s Office. Anyone with further information is urged to call the West Hollywood Sheriff’s Station at (310)855-8850.