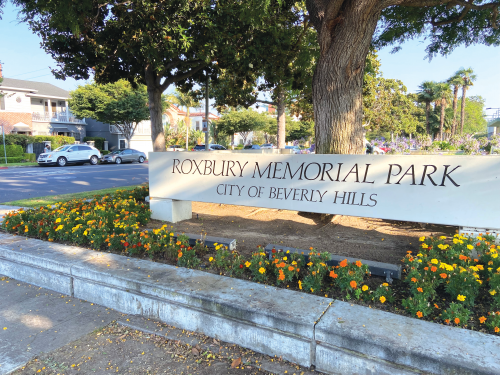 A landscape boulder and plaque in memory of Vahagn Setian will be placed in Roxbury Park. (photo by Edwin Folven)

A father’s goal to keep his son’s memory alive and inform teenagers on the importance of making quality decisions continued Nov. 16, when the Beverly Hills City Council approved a memorial in honor of Vahagn Setian.

The Vahagn Setian Charitable Foundation will place a landscape boulder and plaque in Roxbury Park in Setian’s name, and organizers will also honor Setian by planting a tree as part of the city’s Arbor Day celebration.

A Beverly Hills High School senior at the time, Setian died in a collision involving actor Lane Garrison, who was under the influence, in Beverly Hills in 2006. The teenager was a passenger in Garrison’s car, which struck a tree. The actor was later sentenced to 40 months in prison.

The Setian family established the foundation shortly after his death, and it has strived to spare families from the same heartbreak in multiple ways ever since. His father, Karén Setian, said the foundation’s message is increasingly necessary.

“There are many, many, many avenues to deliver the message to them,” he said. “In our case, it’s very organic, very natural.”

Perhaps the most notable method is through its participation in the California Office of Traffic Safety and California Highway Patrol’s Every 15 Minutes program, which simulates alcohol-related tragedies involving their peers – from the accident to memorials. Several entities participate, including the Beverly Hills police and fire departments and Cedars-Sinai Medical Center.

Six such events have been held at Beverly Hills High School since Vahagn’s death, and Karén Setian shares his pain with students at the end. The assemblies are rewarding but taxing, he said.

“Trust me, it’s not easy to stand next to a casket – even though it’s empty and it’s a program – and speak to 1,500 kids about your loss and the things that they need to think about. That’s not an easy thing, but it is important, and therefore, I’ve been doing it many, many years.”

The foundation also hosts a 5K run/walk annually. However, the pandemic has put the event on hold temporarily. Instead, family and friends have opted to plant a tree in remembrance of Vahagn, a tradition they’ve always wanted to start.

The funds raised support two of Vahagn’s passions, art and music, among others. Karén Setian said the foundation has donated musical instruments to families in need, an effort that was especially helpful to some students during the lockdown.

It also has a scholarship program and hosts fashion shows.

Although the foundation will not host its run/walk this year, it will be supporting the Beverly Hills Police Department’s team in the Los Angeles Police Revolver and Athletic Club’s Baker to Vegas Relay, a law enforcement foot race challenge, in the spring.

“One major thing I always wanted to communicate with our youth is that the police are not your enemy,” Karén Setian said. “They’re your friend. They’re your best friend actually. There are a lot of [police departments] that are looked upon in a very negative manner. For many years, they have always been next to us.”

Although the foundation’s message is earnest, the upcoming tree planting was “something nice to do” to recognize the foundation’s 15th anniversary, Karén Setian said. The council’s approval Tuesday was unanimous. The item was on the council’s consent calendar but was pulled so that the council could receive a presentation.

“This is certainly an honor that should be made, and I’m fully supportive of it,” Councilman Lester Friedman said. “I thank the Setian family for all the work that they do in memory of Vahagn in terms of education at our school. I think it’s really, really important work.”

“This truly was an incredible tragedy for our community, and this family really turned it into something that brought our community together,” she added.

Karén Setian said the family is pleased that its message resonates with students and challenges them to think critically about their decisions. He said his son was a caring individual, and that is reflected in their message.