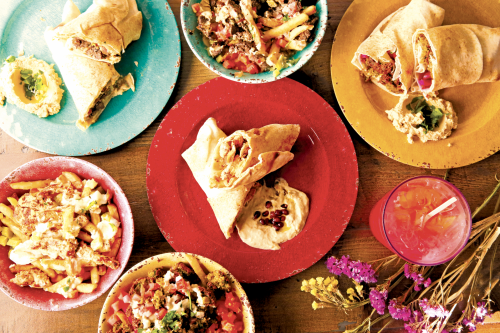 Sumac Mediterranean Cuisine serves up a variety of shawarmas, salads and kabobs. (photo courtesy of Sumac)

As I was wandering around Hollywood recently, I happened upon Sumac Mediterranean Cuisine on the corner of Highland and Lexington.

A sign offering a National Shawarma Day special – a shawarma wrap and loaded bowl for a discounted price – beckoned to me. Because it was lunch time, I walked inside where I met Chef Eli Berchan and his wife Stephanie behind the counter.

In the former “The Record Collector” store, the couple prepares delightful Old-World recipes passed down by their family matriarchs.

The restaurant gets its name from the tangy sumac spice that primarily grows across the Mediterranean region. It’s made from dried and ground berries of the sumac flower and offers a sour, acidic flavor that is similar to lemon juice.

The menu lists a variety of shawarmas, salads, kabobs, sauces and bowls. The Lebanese bread wraps and sandwiches can be filled with falafel, kabob or shawarma. The couple also makes a Lebanese-style pizza called mankoushe, a crisp dough topped with Za’atar and cheese. A Mediterranean variation is served with tomato sauce, oregano and mozzarella cheese.

Shawarma can be ordered with chicken or beef, either as an entree, wrap or on top of loaded bowl fries. A kafta kabob is made with ground beef, minced onions, chopped parsley and spices.

Vegetarians can select a variety of salads, including a sesame enhanced eggplant baba ghanoush and a refreshing tabbouleh made with chopped parsley, tomato, crushed wheat, green onions, mint, olive oil and lemon zest and juice. A vegan tomato soup is made with coconut milk.

As I waited for my chicken shawarma, a falafel wrap and a loaded chicken bowl, Eli Berchan told me how he first entered the culinary world in the catering business.

When he and Stephanie got married, they started cooking and entertaining in their home. With a third partner, the couple opened Sumac seven months ago, where they continue to cater and serve up a delicious taste of the Mediterranean.

I sipped a glass of lemonade, homemade with his grandmother’s special recipe, while waiting for my lunch. Not overly sweet, the refreshing beverage offered a slight pucker of sourness and tartness. On the counter, a clear case displayed tantalizing honey and walnut baklava made with layers of crispy phyllo pastry, another family recipe.

“We prepare fresh-to-order food that is made with organic and locally-grown ingredients,” Eli Berchan said. “We cook with passion and serve with love.”

The flavors of the chicken shawarma reminded me of food from travels through villages in Spain and the islands of Greece, which is due to the care taken when preparing and marinating the beef.

“We clean the chicken in lemon juice, water, kosher salt and ice. Then we marinate it for four days, before placing it on the grill,” Eli Berchan said. “This tedious process produces a more flavorful protein. You won’t find shawarma on a spit here, but you will find our meats are leaner and not as greasy.”

The loaded bowls are best to eat as soon as they are prepared, and are large enough to share. The falafel is not greasy, and it’s even better when dipped in garlic paste or hummus. Using 100% garbanzo beans, the hummus is thicker than most, and the homemade garlic paste has a pleasing zing to it.

Sumac offers a few tables for guests to dine outside along Highland Avenue. There is also a greenery wall with neon lights that spell out “How You Doin’? Sumac Peeps” for Instagram memories.

The restaurant offers a catering package that feeds up to 12 people, and includes two salads, two appetizers, two meats, 10 pieces of falafel or two portions of green bean stew or organic lentils with rice. It also comes with pita bread, tahini sauce, garlic sauce and pickles.