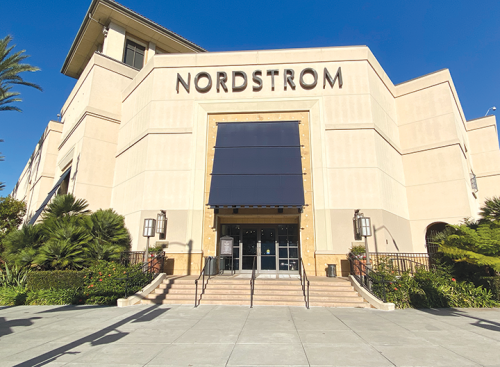 A group of suspects smashed a window and stole merchandise from the Nordstrom department store at The Grove on Monday night. (photo by Edwin Folven)

Los Angeles Police Department officers arrested three male suspects who were allegedly part of a group that smashed a window on Nov. 22 at the Nordstrom department store at The Grove and stole an undisclosed amount of merchandise.

Police are investigating whether the suspects were involved with any similar burglaries in other parts of Los Angeles and Beverly Hills, where multiple suspects attempted to smash windows and break into the Louis Vuitton and Saks Fifth Avenue stores overnight from Nov. 20-21. The suspects were unable to get inside the two stores in Beverly Hills and fled before police arrived. Additional security has been deployed in the Rodeo Drive shopping district to combat similar crimes.

LAPD spokesman Drake Madison said the burglary at the Nordstrom occurred at 10:40 p.m. Multiple vehicles pulled up outside an entrance to the department store at Third Street and The Grove Drive and smashed a large window. Madison did not know how many suspects were involved other than the three who were arrested., but media reportes have stated the burglary involved nearly 20 people

The suspects entered the Nordstrom store, which was closed, but did not enter any other parts of The Grove. A sledgehammer allegedly used to break the window was recovered at the scene.

Madison said officers from the Wilshire Division saw an SUV fleeing the area and a pursuit occurred. Officers followed the vehicle to South Los Angeles, where the three suspects got out and ran away, Madison added. Officers established a perimeter and took them into custody in the early morning hours of Nov. 23, he said. Detectives are continuing an investigation into the crime.

The burglaries in the Los Angeles area occurred after numerous similar crimes involving large groups of people looting stores were reported in the Bay Area last weekend. The LAPD will monitor malls and shopping centers in an attempt to prevent additional crimes.