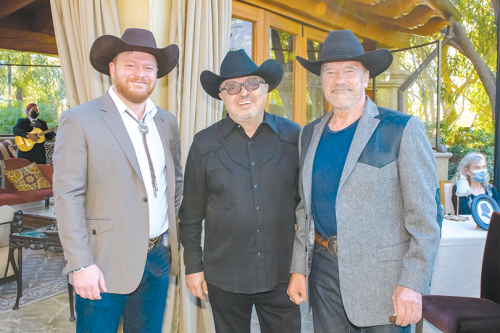 Rodeo Drive may be a global retail and tourist destination, but its businesses and retailers have been increasingly looking local, especially in terms of their philanthropic efforts leading up to the holidays.

The Rodeo Drive Committee recently promoted a handful of its fashion retailers’ charitable initiatives as an acknowledgement to the conversations about social responsibility that have happened over the last year and a half.

“More than ever, each brand by themselves … are not just looking to contribute and support, but are also looking for an authentic contribution to something,” said Kathy Gohari, the committee’s president. “At one point in the lockdown, when everybody felt helpless, the only thing you could do was try to help wherever you could. So, that has been continuing.”

The committee gave back too, donating lunches and dinners to employees and volunteers at Cedars-Sinai Medical Center when the pandemic was at its peak. Gohari said the committee was not alone in wanting to contribute.

“Every day on Instagram, you see a different brand coming up with some sort of a partnership or supporting a new cause,” she added. “We just thought it was an interesting [trend] as we were going into the holiday season … the season of truly giving. It’s just an appropriate conversation to have.

“When we look at big brands like Gucci and LVMH, they all have major partnerships globally, but it’s the people who work in the stores, the managers in the stores, who also want to be part of it and want to have more of a local connection to it. So, they’re reaching out to their corporate offices and asking if they can participate locally, and fortunately, almost always the answer is yes.”

The American Cancer Society, the Breast Cancer Research Foundation, After-School All-Stars, the Zegna nature reserve, Miracle Babies Los Angeles and the Robin Hood Foundation were among the organizations and causes the committee showcased.

In September, luxury watch and jewelry retailer Westime co-hosted its eighth annual charity night for After-School All-Stars, a program founded by Arnold Schwarzenegger in 1992. Held at Schwarzenegger’s home, the event raised $6.25 million, the largest in its history.

Greg Simonian, Westime’s president, said the partnership with ASAS originated 10 years ago from the company’s desire to give back. Since then, the collaboration has blossomed.

Simonian said Westime’s contributions are for the cause – not the publicity. It doesn’t hurt that the charity is a ton of fun and aims to starkly contrast from typical black-tie galas that feature speeches and over-priced entrées, he said.

“I think you do see a lot of [philanthropy] in the sort of ‘luxury world’ in America,” Simonian said. “The idea of giving back and the idea of donating to various causes that people are passionate about, I think it’s uniquely an American thing. It’s done all over the world – of course, there are philanthropists from all over the world – but it’s very American. You don’t see it as a necessity in luxury sales in Europe.”

ASAS chief of staff Kristy McCarthy said Westime’s support has been “absolutely instrumental” for the nonprofit organization’s programming, which is utilized in 19 chapters nationally, with one in Los Angeles. She said the charity night in September was “just tremendous.”

Elsewhere on Rodeo Drive, fashion retailer MCM supported the American Cancer Society through the month of October by donating 10% of its special product assortment sales. It’s a relatively new partnership of just three years, but it has raised $50,000 toward cancer research so far.

“I feel like everyone is touched by cancer in some way – or have friends who have been affected by it or family members – so the customers really gravitate toward this initiative,” said Dan Manioci, MCM’s head of marketing and communications. “They like being a part of it.”

He said the partnership began in the Texas market as a localized store-incentive, and then it grew into a company-wide initiative. Manioci said he sees philanthropy as a necessity for businesses, which should leverage their influence.

“I think that brands today need to,” he added. “It’s no longer [as simple as] you sell a product. I think you need to be hyper-involved and aware of your actions. …If you’re making money, you should be giving back. We believe that, as a brand, we should be helping people too. It’s not just about the bottom line.”

In addition to Westime and MCM, Jimmy Choo donated 20% of the proceeds from its exclusively-curated, bright-pink shoe and handbag collection to the Breast Cancer Research Foundation up to $100,000 for the month of October.

And, through Jan. 1, David Yurman will donate 20% of the purchase price of select North Star designs to the David Yurman X Unity Fund that benefits the poverty-fighting Robin Hood Foundation.

“What a little bit of money does for these types of causes really makes you take a moment and appreciate everything that you have going into the season,” she added.