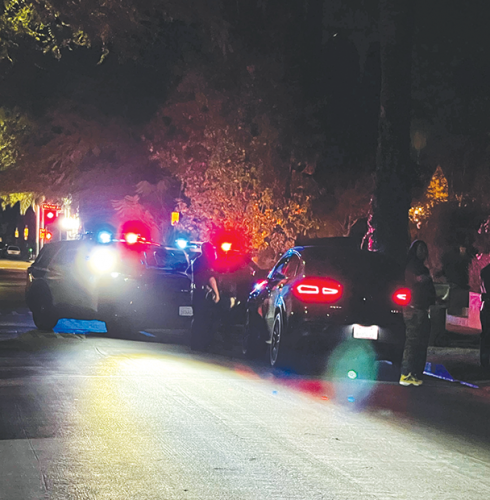 Police are investigating a robbery on Nov. 13 in the 700 block of Gardner Street. Authorities have not said whether it is connected to other hold-ups. (photo courtesy of Melrose Action)

The Los Angeles Police Department’s Robbery-Homicide Division is seeking information about suspects involved in a series of follow-home robberies that have occurred in different parts of the city since the beginning of the year, including the Melrose District and Hollywood.

Authorities are warning people to be aware of their surroundings when leaving restaurants and nightclubs, and before exiting vehicles when arriving home late at night. Anyone who believes someone is following them is advised to call 911.

The Robbery-Homicide Division is investigating 110 reports of follow-home robberies since the start of 2021 and believes the crimes are being committed by different groups of suspects. A robbery that may be part of the series occurred at approximately 2 a.m. on Nov. 13 at a residence in the 700 block of North Gardner Street. Multiple suspects are alleged to have followed the victims from a birthday party at an undisclosed location and robbed them at gunpoint when they arrived at the residence. A Gucci purse and $4,000 in cash was stolen.

Detective Bernard Romero, of the LAPD’s Wilshire Division, said the victims of the robbery on Gardner Street were uncooperative with officers. They declined to provide information about the suspects and their vehicles, he said, but police are still investigating based on security camera footage and other unspecified evidence.

Romero added that another robbery occurred at approximately 3 a.m. on Nov. 13 in the 500 block of North Crescent Heights Boulevard. A female victim called police the following morning and told them she had been at a house party on Crescent Heights Boulevard when a group of four masked suspects entered and robbed approximately 20 people at gunpoint. An investigation into that incident is also ongoing and police have struggled to corroborate the victim’s report, Romero said. He added that the robbery allegedly occurred at a short-term rental.

“If she wouldn’t have called us, we wouldn’t have known about what happened,” Romero said. “I’m not sure why they don’t want to report it. It’s unfortunate that the victims don’t want to utilize the police department to solve the cases. We were left with virtually nothing.”

Romero surmised that social media is a common factor in some of the recent robberies. He believes the suspects learn about parties when people post about them on social media, and then target people at the locations.

Police cautioned that perpetrators in the follow-home robberies appear to be targeting people wearing expensive jewelry and carrying luxury purses and other high-value property. Detectives said previous follow-home robberies have occurred after victims left restaurants, nightclubs and other locations in the Melrose area, Hollywood and the Jewelry District downtown. Some victims have been targeted because they were driving expensive vehicles, police said.

Peter Nichols, co-founder of Melrose Action, said the trend has caused further concern for residents, especially those living near the scene of the robbery on Gardner Street.

“Apparently [the victims] were coming back from a night out and three cars were tailing them,” said Nichols, based on information he received from people living near the scene. “It’s alarming. Obviously, the community is concerned again.”