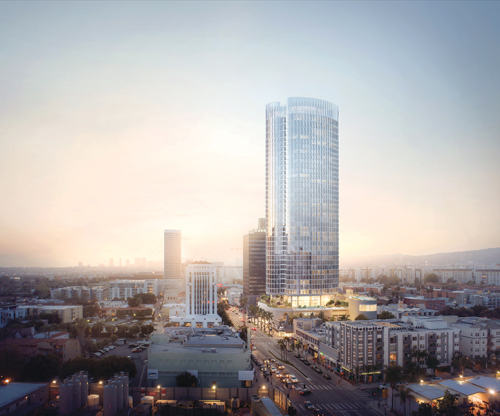 The Mirabel would be a 42-story mixed-use building. (rendering courtesy of Walter N. Marks Inc.)

The Staples store at 5407 Wilshire Blvd., two blocks west of La Brea Avenue, will close at the end of the week after the company opened a new location in the Miracle Mile at 5665 Wilshire Blvd.

The building at 5407 Wilshire Blvd. is at the site of a proposed 42-story, $500-million mixed-use development called the Mirabel, which will soon undergo an environmental impact review with the Los Angeles Department of City Planning.

The property’s owner, Walter N. Marks III, said the building housing the Staples store and another adjacent space formerly occupied by Wilshire Beauty will remain vacant while the Mirabel project makes its way through the EIR process, which could take a year or longer. Marks said he will soon open the lots behind the buildings for monthly paid parking while the project is under review.

“We have owned the Staples building since 1968 and Staples went in there in 1990,” Marks said. “They opened up a new store down the street and will be closing the store [at 5407 Wilshire Blvd.].”

The Mirabel is proposed to offer 348 housing units, including 38 affordable units, above approximately 10,200 square feet of ground-floor retail space. Marks said the project has been in the works for six years.

The Mirabel is a by-right project, meaning the proposal is within what is allowed under current zoning for the parcel. The planning department asked for an EIR to consider potential impacts. The public can provide input during the EIR process, which Marks said is expected to begin before the end of the year. The Los Angeles Planning Commission will make a final decision after the EIR process is finished. The planning commission has the final vote on the project unless it is appealed, in which case the project will go before the Los Angeles City Council for consideration.

Marks said the building will provide many benefits for the Miracle Mile community, including housing and new commercial amenities. It would be located two blocks from the Purple Line’s Wilshire/La Brea subway station, which is scheduled to open in 2024.

In August 2020, the Mid City West Community Council voted to support the Mirabel project. The Greater Miracle Mile Chamber of Commerce has also backed the development.

“I am very supportive of Wally’s project,” Greater Miracle Mile Chamber of Commerce president Steve Kramer said. “I think it’s a project that is being built where it should be built – immediately adjacent to a major transit center.”

A group called the Miracle Mile Coalition is opposed to the project and has launched a petition on change.org. The group and the 1,328 people who signed the petition as of Nov. 9 believe the project does not contain enough affordable housing and would “destroy” the Miracle Mile.

Greg Goldin, president of the Miracle Mile Residential Association, said the organization has been monitoring the project and will weigh in as the EIR process moves forward.

“We are kind of in a wait-and-see mode about the project,” Goldin said. “We have met with Wally and looked at the project in its present configuration. We are, of course, very much aware of the concerns voiced by people in the neighborhoods to the north of Wilshire Boulevard, including the shading issue of a tall tower looming over a predominantly two-story neighborhood. I think the MMRA’s view is we haven’t had a chance to sit down with all of the people who are affected and see what their concerns are, and see if they are the same concerns we have. What role exactly we can play, I don’t know.”