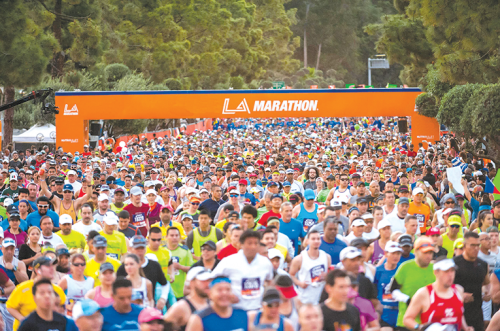 Runners will pass through Hollywood, West Hollywood and Beverly Hills during the 2021 L.A. Marathon. (photo courtesy of Conquer Endurance Group)

The 36th annual Los Angeles Marathon will be held on Sunday, Nov. 7, and athletes will run on streets in Los Angeles, West Hollywood and Beverly Hills before ending at the finish line on Avenue of the Stars in Century City.

“We are thrilled to welcome the L.A. Marathon back to Beverly Hills,” Mayor Robert Wunderlich said. “We hope our iconic streets inspire and bring a spring to the steps of the runners as they enter the final third of the race.”

“As Los Angeles Marathon runners set out on a new 26.2-mile course from Dodger Stadium to the Avenue of the Stars in Century City, they’ll pass through incredible spots in our city that make history and mark progress,” West Hollywood Mayor Lauren Meister added.

Beverly Hills will welcome runners with entertainment and community support along the route. The L.A. Marathon will follow health and safety protocols outlined by the Los Angeles County Department of Public Health. Spectators are encouraged to practice physical distancing and wear face coverings along the route.

For questions regarding Beverly Hills street closures on the day of the marathon, call (310)550-4680. For information, visit lamarathon.com and beverlyhills.org/marathon.