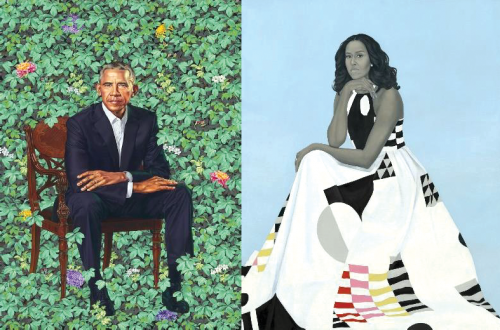 On a pristine, white wall in a gallery at the Los Angeles County Museum of Art hangs two portraits which break the mold outlined by the presidential portraits before them.

The brightly-colored portraits of Barack and Michelle Obama, on loan from the Smithsonian’s National Portrait Gallery, are hung so that the viewer is facing north. The gesture is an homage to the North Star, the Underground Railroad and the continued quest for freedom, said Liz Andrews, a co-curator for LACMA’s debut of “The Obama Portraits Tour.”

“One generation before Obama, a Black man wouldn’t have been allowed to vote in a presidential election,” she said. “It’s only in keeping an eye on the North Star generation after generation that has led us to a place where it’s possible to have a Black president.”

Since their unveiling in 2018, the portraits have embarked on a five-city tour, which began at the Art Institute of Chicago, before continuing to the Brooklyn Museum, LACMA, Atlanta’s High Art Museum and The Museum of Fine Arts, Houston.

Each museum is presenting the portraits in their own way, and curators at LACMA paired the portraits tour with an exhibition titled “Black American Portraits,” which highlights the evolution of portraits done by and featuring Black Americans. Both exhibitions will open to the public on Nov. 7.

The exhibition in the Resnick Pavilion features work spanning 200 years, with portraits from the Emancipation era, the Harlem Renaissance and most recently, the COVID-19 pandemic.

“We want people to think about the history that led to the Obama portraits,” Andrews said. “When you walk up to them, they’re highly-symbolic, powerful works, and what makes it possible for these beautiful portraits to exist is a history of Black Americans using portraiture as a tool for projecting images into the world of themselves through their own eyes.”

Andrews said that historically, portraiture in America has been used as a tool of power and wealth that has not always been available to Black subjects and sitters. In the country’s early years, it was mostly wealthy, white land owners who had access to portraiture. It wasn’t until the Emancipation era that Black Americans began acquiring portraits of themselves.

“Women would wear these gorgeous dresses and subjects would pose with books or American flags,” Andrews said. “They began projecting an image of beauty and self-assurance in a way that was never possible before.”

As time went on, portraits and sculptures began shifting to reflect the social movements happening at the time. During the Harlem Renaissance, artists asserted pride in Black identity. Throughout the Civil Rights movement, documentary photography highlighted the Black experience.

“In every generation, there have been people grappling with how to convey the complexity of their sitter as both the individual, but also as someone who speaks to a larger moment in time,” Andrews said.

That idea expands into the current artistic climate, which Andrews said is undergoing its own renaissance due to last summer’s mobilization for racial equality. New work, she said, celebrates Black figures, but also challenges viewers to think about what it would be like to “exist in a world where to be Black is to live in a very precarious state of being.”

Though there are many current works that depict pain and hardship, Andrews said she and co-curator Christine Y. Kim wanted to bring an exhibition that celebrates Black history.

“In many ways, we wanted to counter the abundance of images of Black suffering in the past year,” Andrews said. “There is a desire to show beauty, subjectivity and really draw a lineage of the power of portraiture leading to these Obama images.”

Aside from the portraits being the first of a Black president, the paintings are a departure from the typical conservative colors and backgrounds used in presidential portraits.

“When the president and the first lady chose the artists to portray them, they chose artists who have practices that are dedicated to re-envisioning portraiture through a Black lens,” Andrews said.

In his topiary, Wiley painted three flowers: chrysanthemums to represent the president’s tie to Chicago, white jasmine for his youth in Hawaii and African blue lilies to represent Kenya, his ancestral home.

In a lecture held by the Art Institute of Chicago, the first stop on the tour, Wiley said he wanted to create a portrait that represented the unprecedented presidency and unequaled moment in American history.

“I really wanted to make a portrait that was forward moving, forward-thinking, but also looking backwards,” he said. “The kind of global presence and reach of one man’s story has an ability in that painting, and certainly in his presidency, to resonate all over the world.”

The portrait of Michelle Obama is done by Amy Sherald, who is known for her portraits of Black figures rendered in gray scale, which asks the viewer to question their ideas about how skin color is equated with race and class, Andrews said.

In the portrait, the first lady wears a geometric patterned dress, designed by Michelle Smith. Although originally designed with Pop and Optical Art in mind, Sherald recognized its visual affinities with the quilts from Gee’s Bend, Alabama, according to the Smithsonian. Gee’s Bend is a remote Black community populated by descendants of former slaves, and the quilts of Gee’s Bend reference the independence and resourcefulness of the African American experience.

“I feel like I painted two people when I painted Mrs. Obama. I painted Michelle Obama from the south side of Chicago, who’s very accessible and who everyone fell in love with. And then I painted a portrait of the first lady,” Sherald said in the Art Institute of Chicago lecture. “What I wanted to capture in this painting of her was something that we had never seen in all of the images that exist of her on the internet – something that just felt intimate and truly, authentically her.”

Andrews said she’s filled with anticipation as Angelenos will soon see the exhibitions, and she hopes that as viewers learn about the history of Black portraiture, the Obama portraits will become more impactful.

“I hope that people see that in order to fully appreciate the significance of Barack Obama and Michelle Obama, it’s really necessary to think about and see that Black Americans have a long history of using portraiture to envision freedom, portray love and make a vision of Blackness outside of the dominant lens, which is so often rather unbecoming for Black people,” Andrews said.

Council motions all over the map