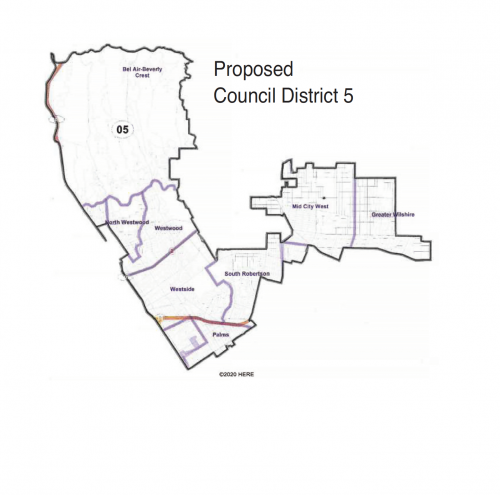 A new map of the Los Angeles City Council’s 5th District shows how it would extend east to include the Miracle Mile and Hancock Park. (photo courtesy of the city of Los Angeles)

The Los Angeles City Council is considering new council district boundaries after a redistricting map was approved on Nov. 9.

During a Nov. 5 meeting, the council’s Ad Hoc Committee on Redistricting voted to move forward with a hybrid map that included many of the recommendations from an independent redistricting commission combined with minor alterations to the current council district boundaries. The council plans to take a final vote on the map on Dec. 1.

At the Ad Hoc Committee on Redistricting last Friday, none of the other six members of the committee seconded a proposal by Councilwoman Nithya Raman, 4th District, to consider a different map that would have kept Hancock Park, the Miracle Mile and Park La Brea in her district, and the motion failed.

The map approved by the city council on Nov. 9 largely places the 4th District’s boundary along the southern portion of the Hollywood Hills. The district would include Griffith Park, Los Feliz and a sliver extending into Silver Lake where Raman lives. The independent redistricting commission recommended extending the district boundaries north to Shadow Hills and Sun Valley.

However, the council’s new map extends the 4th District northwest into the San Fernando Valley to include Studio City, Sherman Oaks and Encino.

The hybrid map approved by the council moves the Miracle Mile and Hancock Park from the 4th District to the 5th District. Most of Hollywood will be included in the 13th District, as well as Windsor Square and Larchmont Village.

Additionally, Councilman Paul Krekorian’s 2nd District, which potentially could have been moved farther west in the San Fernando Valley per the independent redistricting commission’s map, will largely be kept in place in the North Hollywood area in the map approved by the council.

A spokeswoman from Raman said on Nov. 10 that the councilwoman would not be making any further comments on redistricting at this time and provided a statement.

“This map was not the outcome we hoped for when the redistricting process began. We lost far more of our district than any other council member – 40%, or more than double than any other council district – in an overtly politicized process that unnecessarily left so many Angelenos in the dark,” Raman said in the statement. “This outcome was not inevitable, and it is only because of the advocacy of our constituents that we were able to retain as much of CD4 as we did.”

Council President Nury Martinez, 6th District, outlined the process moving forward. The council will hold a second state mandated public hearing on Nov. 23 and is expected to vote on an ordinance enacting the final map on Dec. 1. The redistricting process must conclude by the end of the year.

Councilman Paul Koretz, 5th District, said he is pleased with the council’s map and is enthusiastic about representing new areas including the Miracle Mile, Park La Brea and Hancock Park.

“I think, by-and-large, this was a very positive redistricting for the residents of Council District 5,” Koretz said. “We were largely able to keep the council district intact and were able unite members of the orthodox Jewish community. We were also able to add Pan Pacific Park, the Los Angeles Museum of the Holocaust, The Grove, Television City and the Farmers Market, as well as Park La Brea, to the district.”

“The 13th District’s population loss in the most recent census required that the district grow to ensure fair representation, commensurate with the population in other City Council districts,” O’Farrell said. “I am pleased to see that the vast majority of the existing 13th District remains intact and am excited to meet new constituents and warmly welcome new communities into the district.”

Krekorian, who was critical of the independent redistricting commission’s map, said he was pleased with the outcome of the council’s vote.

“The hybrid map prepared by the council’s ad hoc committee represents a dramatic improvement over the map produced by the redistricting commission, particularly where the Valley is concerned,” Krekorian said. “The strong support of the Valley’s neighborhood councils clearly played a decisive role in this outcome. I’m glad that I will continue to represent the communities of the eastern San Fernando Valley, as I was elected to do.”

Cindy Chvatal-Keane, president of the Hancock Park Homeowners Association, supported the move of her neighborhood into the 5th District and said it keeps similar communities together.

“I think it’s pretty good. I am happy with it for everybody,” Chvatal-Keane said. “Nithya, at the end of the day, lost a chunk, but overall, it keeps 60% of what she had.”

Man arrested in Indiana for murder on subway