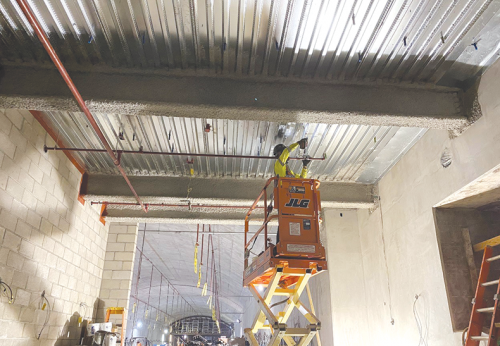 Crews are installing sprinklers and other safety measures at the Wilshire/La Brea subway station. (photo courtesy of Metro)

Metro is planning work at many locations along Wilshire Boulevard during the coming weeks as the Purple Line Extension subway project moves ahead.

In Century City, underground pipes and infrastructure are being relocated through early 2022. Partial traffic lane closures are in place on Avenue of the Stars to facilitate station excavation, hauling and material deliveries. Eastbound and westbound vehicle access on Constellation Boulevard will be maintained between Century Park West and Century Park East.

Two tunneling machines are currently digging east from Century City under Beverly Hills. At the start of November, one machine reached Wilshire/Bedford and the other reached Wilshire/Roxbury. The machines will continue tunneling east until they reach the future Wilshire/ La Cienega station, where tunneling for the first section of the subway line is completed.

In Beverly Hills, geotechnical instruments atop poles will be temporarily installed on public sidewalks along Wilshire Boulevard to monitor construction in November. Each instrument will be in place for approximately one month before being removed and relocated.

Crews are continuing construction underground at the future Wilshire/Rodeo subway station. The floor has been completed and walls are under construction. Lane reductions will be in place along Wilshire Boulevard between El Camino and Crescent drives in November to support work at the station.

Metro is also advising about weekend lane reductions on Wilshire Boulevard between Carson Road and La Cienega Boulevard for subsurface investigation. The work is necessary to determine if additional jet grouting and soil improvement is required to support the subway tunnels.

Metro is also making progress on the future Wilshire/Fairfax subway station. Crews are working on appendage structures housing vital systems near Wilshire/Fairfax. Work will also continue on the south side of Wilshire Boulevard at Orange Grove Avenue through April 2022.

Crews are nearing the completion of construction for the Wilshire/La Brea station and will be working on the final appendage structures, including passageways, entrances and exits, over the next four to five months. Plans call for the temporary decking on Wilshire Boulevard between La Brea Avenue and Orange Drive to be removed as early as April. The work will require eight to 10 full weekend closures of Wilshire Boulevard in the area, similar to closures that occurred in 2016 when the decking was placed on the road surface over the subway station. Metro will provide further information once project details are available.

Crews are also anticipated to begin installing permanent rails in the tunnels between Wilshire/La Brea and Wilshire/Western in December. The next lunchtime webinar on Purple Line Extension construction is scheduled on Wednesday, Dec. 1, at noon.