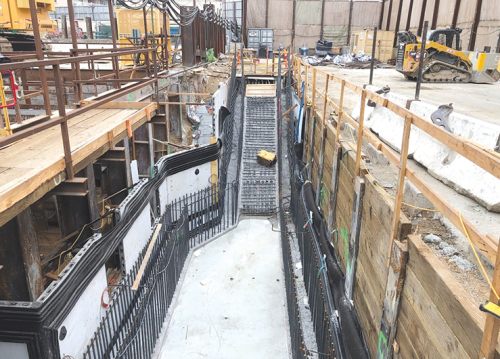 Crews are building exits and passageways at the future Wilshire/Fairfax subway station. (photo courtesy of Metro)

Crews are continuing station construction and tunneling support at the future Century City/Constellation subway station. Underground pipes and infrastructure are being relocated through early 2022 in the area around the station. Partial traffic lane closures are in place on Avenue of the Stars to facilitate station excavation, hauling and material deliveries. Eastbound and westbound vehicle access on Constellation Boulevard will be maintained between Century Park West and Century Park East.

Station appendage construction is also ongoing under Wilshire Boulevard between San Vicente and La Cienega boulevards, and lane reductions will be in place. Appendages are rooms that are part of the underground station. They include spaces for vital systems, as well as walkways, stairways, entrances and exits.

Concrete and material deliveries to construction staging areas near Wilshire/La Cienega are expected to become more frequent in November. Work will continue 24 hours in the La Cienega and Gale staging yards.

Appendage construction is also occurring at the future Wilshire/Fairfax and Wilshire/La Brea subway stations. Through April 15, 2022, Wilshire Boulevard will be reduced to two lanes in each direction between San Diego Way and Spaulding Avenue. Traffic on Fairfax Avenue will not be impacted. However, a K-rail work zone will be in place at the southwest corner of Wilshire Boulevard and Fairfax Avenue.

Work is also ongoing in staging yards at Wilshire/La Brea. Intermittent lane closures are anticipated on Wilshire Boulevard and side streets in the area. The sidewalk on the northwest corner of Wilshire/La Brea will be closed during the construction.

Farther east, Wilshire Boulevard has been reduced to two lanes in each direction between Rossmore Avenue and June Street around a K-rail work zone. Crews are supporting ongoing construction in the tunnel underneath Wilshire Boulevard at the site.