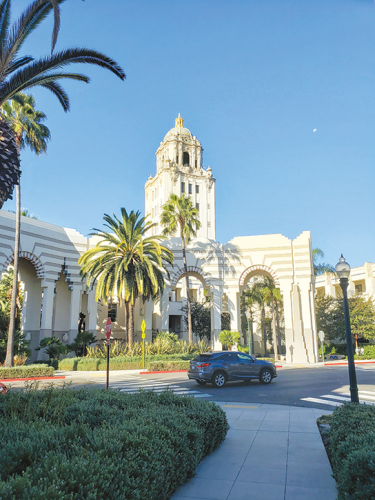 He said the impetus for the letter was simple: he saw something, so he said something.

Ostroff is seeking a commitment from each candidate to openly request that PACs not support their campaigns. He penned a letter stating his reasoning, and 85 individuals — some of whom are former mayors and city officials – signed it. Former city treasurer Eliot Finkel and Myra Demeter, a fellow planning commissioner, helped circulate the message.

Although both the councilman and vice mayor have denied involvement, the organization spent more than $100,000 supporting them – an effort that city officials referred to as a historic first for PACs in Beverly Hills.

Ostroff said that, prior to the election, candidate Lori Greene Gordon asked him whether she should have a PAC formed, and he adamantly advised against it from an ethical standpoint.

“I just think it’s the wrong thing to do,” he said. “That was bad advice in hindsight, because a very well-financed PAC was formed to support [two of her opponents]. But, it really didn’t change my mind [about PACs].”

It did prompt Ostroff to get ahead of the 2022 election, when Mayor Robert Wunderlich and Councilmen Lester Friedman and John Mirisch will look to retain their seats. Andy Licht, chairman of the planning commission, and Beverly Hills Public Works Commissioner Sharona Nazarian have also announced their council candidacies.

Ostroff’s criticism of PACs, which are legally referred to as independent expenditure committees in California, is two-fold: they are an “end-run” to city campaign finance laws and allow elections to be determined by money as opposed to each candidate’s qualifications.

Beverly Hills restricts donations to $450 per individual or organization if a candidate commits to total campaign expenditures of $80,000 or less. If the candidate does not commit to the spending limit, individuals or organizations may only donate $125 or less, Ostroff said.

According to city records, 13 individuals or organizations made donations to Beverly Hills United to Support Bosse and Gold for Council 2020 that exceeded $4,000, with the majority of the donations being more than $9,000.

The PAC lists Stephen Massman as its treasurer, and its contact number is associated with Kaufman Legal Group and its downtown Los Angeles office. Attempts to reach Massman were unsuccessful by deadline.

The organization was not the only PAC to support City Council candidates last year. The Beverly Hills Chamber of Commerce Leadership PAC contributed approximately $12,000 to support Bosse and Gold’s campaigns using mailers and ads, according to city records.

Kaufman Legal Group is listed as a creditor on the chamber PAC’s pre-election statement from 2020 for professional services.

Ostroff said he is fully aware of the legality of these independent organizations and that the letter technically does not have any teeth, but he is doing his part to raise awareness about an issue that concerns him in Beverly Hills.

“It’s just a bad thing, it’s wrong and it’s bad for our city. … It’s my way of trying to say to candidates and prospective candidates, please don’t do this,” he added.

Thus far, it appears that candidates are taking notice. Licht said that neither he nor his campaign have any involvement in PACs.

“I intend to run a community-inclusive campaign that is positive and transparent,” he said in an e-mail.

Nazarian said only that she is unaware of any PACs being formed to support her campaign as of now.

“Many of the worst problems within our political system can directly be traced back to the role of money in politics and two awful Supreme Court decisions, Citizens United and Buckley v. Valeo,” the councilman said in an e-mail. “But corporations aren’t people, and money isn’t speech. I completely favor comprehensive campaign finance reform and limiting the role of special interests and dark money in elections. We should be electing people with the best arguments and ideas and not those with the biggest megaphones. Simply stated, we need campaign rules that create a level playing field and put the residents first, not corporations and dark money groups with hidden agendas.”

Friedman said he does not want PAC support.

Wunderlich could not be reached for comment by deadline.