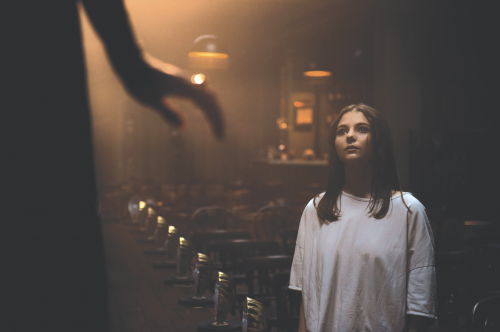 Thomasin McKenzie portrays Ellie, a young woman who moves to London to pursue a fashion career. However, apparitions soon begin to haunt her dreams and her waking moments. (photo courtesy of Focus Features)

Halloween is over. Long live Halloween. While the spooky season dies down, one highly-watchable gem arrives just in the time to quell those candy withdrawals. “Last Night in Soho” knows its way around the tone that makes this season so fun without stressing out horror-averse folks. All it takes is an ethereal blast from the past.

Ellie (Thomasin McKenzie) sees dead people. Growing up in the countryside, she weathered the occasional visit in the mirror from her dead mother, but she’ll soon confront a series of new challenges in the West End of London as she starts fashion school. Her affinity for the Swinging Sixties immediately isolates her from boujee peers who love to hate anything they deem odd.

Ellie’s Beats headphones can only provide so much comfort before she seeks a calmer living space, finding a room in a residence owned by Ms. Collins’ (“Game of Thrones’” actress Diana Rigg in her last role prior to her death in September 2020). Falling asleep her first night, Ellie awakes in the ’60s, taking on the identity of Sandie (Anya Taylor-Joy), who craves the stage.

At first, these dreams inspire Ellie’s designs as she brings the beloved era to life for classroom projects. But Sandie’s relationship with charming music manager Jack (Matt Smith) turns into something more horrific rather abruptly. Eventually, Ellie tries to uncover the truth of what occurred decades ago, whilst apparitions haunt her dreams and waking moments as well.

Edgar Wright doesn’t know how to make a dull film, regardless of genre. The “Shaun of the Dead” director has covered comedy-horror, buddy cop, science fiction, heist thriller and the hybrid excess of “Scott Pilgrim vs. the World,” a musical-comedy pseudo-superhero comic book adaptation.

“Last Night in Soho” marks the auteur’s closest attempt at a straight-out horror flick, but don’t expect traditional scares. Treat it like “Suspiria” and enjoy the aesthetics of a surrealist dive into madness. And in true Wright form, the craft is inviable as Ellie and Sandie rotate leading roles during those dream sequences.

Certainly, film pedants will chastise “Soho” for its plotline. Any seasoned horror and mystery fan might easily uncover the truth. That’s a juvenile approach. While the first half ingratiates itself in all the pomp and circumstance a nostalgic throwback can offer – the lows too – this one’s all about the journey and performances. Nothing feels cliché.

The only real judgement here is based on expectations. Wright has a specific quirk, much like Wes Anderson. His films all feel a certain way, but “Soho” is a 180 with no humor or notable stylizations. That doesn’t mean it’s void of character or originality. Period-specific music helps immensely, along with design and lighting that transport an alluring time to the big screen.

Taylor-Joy’s (“The Queen’s Gambit,” “Emma”) portrayal of Sandie cements the ’60s flare. In her first appearance, she struts into unfamiliar territory with a confidence only described as cinematic as she shuts down creeps in her way. As the story progresses, she sings and dances like a star, not a movie star pretending to accomplish either with a deceitful dose of suspended disbelief.

Then there’s her opposite: innocent, soft-spoken Ellie. At least at first. “Soho” confirms McKenzie (“Leave No Trace,” “Jojo Rabbit”) is no longer a rising star. She arrived. Taylor-Joy’s Sandie is a mesmerizing presence, McKenzie’s Ellie dominates nearly every scene. Her progression from timid to liberated to troubled bookmarks the entire film. And McKenzie evolves flawlessly throughout each stage.

“Last Night in Soho” won’t win the year, though it’ll surely turn some heads come awards season for its technical marvels. Regardless, it remains a splendid nighttime experience, best enjoyed in a properly darkened space, whether safely during a theatrical viewing, or at home when released on demand. It pairs best with a pint, and throw on some Lou Reed to debrief its merits afterwards.