LACO returns to the stage 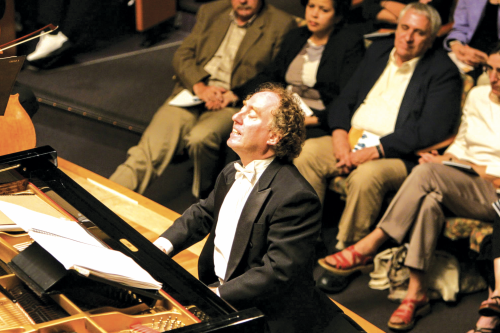 Pianist Jeffrey Kahane will join LACO for its first full live performance since the pandemic began. (photo courtesy of LACO)

Martín also will conduct Beethoven’s “Symphony No. 3” in E-flat major, considered among the composer’s greatest works.

“We have planned a wonderful musical celebration to welcome patrons back to the concert hall to, once again, savor LACO’s artistry and experience the power, emotion and joy of live music,” Martín said. “It will be a true ‘family affair’ with LACO’s remarkable Conductor Laureate Jeffrey Kahane joining us on piano to open the program. I have tremendous respect and admiration for Jeffrey and am deeply honored to, once again, share the stage with him, especially for this significant concert.”

The concert, which marks the orchestra’s full return to the concert hall since the pandemic shuttered live performances more than 18 months ago, is the first of 13 orchestral, chamber and new music programs offered this season by LACO.

“LACO is thrilled to return to a full season of live performances,” executive director Ben Cadwallader said. “The opening program embraces the orchestra’s legacy as one of the world’s leading Mozart interpreters while also showcasing its stellar artistic leadership.”