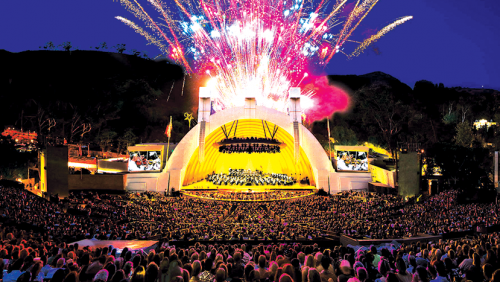 The Los Angeles Philharmonic Association announced the first details of it’s 2022 Hollywood Bowl summer season, marking the end of the venue’s first 100 years and the beginning of its second century.

The full celebratory season of the Hollywood Bowl’s centennial will be announced in February 2022, though some headlining performances have already been shared.

Steve Martin and Martin Short will perform at the annual July 4th Fireworks Spectacular, with three performances at 7:30 from July 2-4. The Los Angeles Philharmonic, led by Thomas Wilkins, will join them with a program of orchestral favorites.

The Steep Canyon Rangers and Jeff Babko will be among the guests joining the comedic duo. Considered one of Southern California’s top Independence Day pyrotechnic displays, the July 4th Fireworks Spectacular at the Bowl has become a local family tradition.

Dates for other popular annual events at the Hollywood Bowl have also been scheduled, including The Hollywood Bowl Jazz Festival from June 25-26, Smooth Summer Jazz on Aug. 28, Movie Night on Sept. 4 and the Sing-A-Long “Sound of Music” hosted by Melissa Peterman on Sept. 17.

The 2022 season will continue the tradition of presenting classical concerts every Tuesday and Thursday night, with Gustavo Dudamel, the LA Phil and a roster of star-studded guest artists. With the LA Phil’s Creative Chair for Jazz Herbie Hancock at the helm, Jazz Plus nights offer an eclectic trip through the world of jazz and beyond. Weekends will be filled with some of the biggest names in popular music, the annual musical, films and film music, and the KCRW Festival.

For additional information and tickets to specific events, visit hollywoodbowl.com or call (323)850-2000.