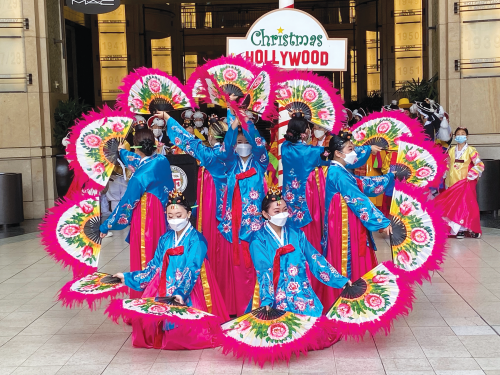 The PAVA World Traditional Korean Band will perform in the Hollywood Christmas Parade on Nov. 28. (photo by Edwin Folven)

The beloved Hollywood Christmas Parade returns on Nov. 28 for its 89th year.

Sheryl Underwood, host of the award-winning television show “The Talk,” will be the parade’s grand marshal. She will be joined by dozens of celebrities, local officials, performance artists, bands, floats and floating balloon characters that will travel through Hollywood beginning at 6 p.m. at the corner of Hollywood Boulevard and Orange Drive. The parade route follows Hollywood Boulevard to Vine Street, south to Sunset Boulevard and west back to Orange Drive. The streets will be closed to traffic and parking throughout the day.

“After a very difficult 20 months, and that is putting it lightly, Hollywood will serve once again as the backdrop to a beloved holiday tradition here in the City of Angels – the 89th annual Hollywood Christmas Parade benefitting the Marine Toys for Tots Foundation,” O’Farrell said. “As the councilman representing the district where the parade takes place, I am thrilled to collaborate with the parade organizers and city departments to ensure the public enjoys this local event and that residents are aware of the restricted access to the area.”

O’Farrell and Los Angeles Police Department Capt. Brent McGuyre, commanding officer of the Hollywood Division, called attention to increased security that will be in place on and around the parade route. O’Farrell said extra security measures are particularly important in the wake of an attack at a Christmas parade in Wisconsin on Nov. 21, when a man drove through a crowd, killing five people and injuring more than 40 others.

McGuyre said there are no threats to events planned in Los Angeles. He said police officers will provide a highly visible presence at the parade and the department will use undercover operations and other security measures.

“We are implementing additional precautions with this parade to include the interdiction of vehicles onto the parade route. Obviously, our partners at the Department of Transportation will be shutting down traffic all along the route so vehicles will not even be able to get close to the parade route,” McGuyre said. “In addition to that, we will have LAPD officers lining the route to look out for any suspicious activities and we will be taking additional security precautions this year, in addition to what we’ve implemented in years past, just to make sure this is a safe and secure event.”

The Los Angeles Department of Transportation is encouraging audience members to arrive early and use public transportation if possible. A list of street closures and parking restrictions is available by visiting thehollywoodchristmasparade.org.

Bands from throughout Los Angeles will perform, including the U.S. Marine Corps Band, Los Angeles Catholic Schools Band, PAVA World Traditional Korean Band, Korean American Youth Performing Artists and the Los Angeles Police Emerald Society Pipes and Drums. The Majestic Acres, Painted Ladies Rodeo and Broken Horn Ropers equestrian units will perform, and giant balloons of characters from “The Nutcracker,” Dr. Seuss books and other children’s favorites will be carried along the route. Young audience members will not want to miss Santa Claus, who will arrive on a float with U.S. Marines sergeants Jonathan Lazer and Raymond Paladino.

The parade runs from 6-8 p.m. on Nov. 28, and free curbside viewing is available along the parade route. Tickets for grandstand seating are available by visiting ticketmaster.com.

The parade will also be filmed and later broadcast on the CW network at 8 p.m. on Friday, Dec. 17.