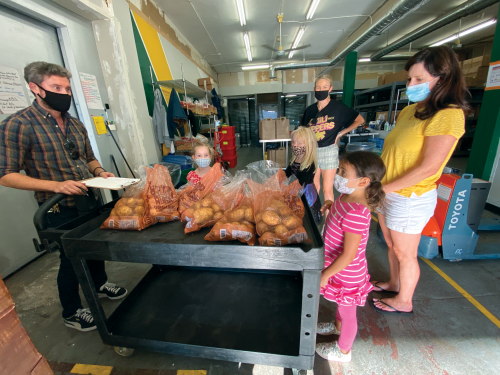 As Angelenos prepare their turkey and stuffing for Thanksgiving, one nonprofit is focusing its attention on ensuring continued food security for Hollywood residents.

According to data from the Los Angeles Regional Food Bank, one in five Angelenos, or about 2 million people, are food insecure, and Hollywood Harvest is hoping to help.

Hollywood Harvest was started at the outset of the pandemic to deliver groceries and other essential items to people ages 65 and older so they didn’t have to leave their homes.

Organized by several Central Hollywood Neighborhood Council members, a group of volunteers called as many seniors in Hollywood as they could to assess their needs. From there, volunteers made deliveries to about 450 individuals every week.

In eight weeks, the volunteers had delivered 32,000 pounds, or 16 tons, of food to seniors in need.

“It was nuts. Looking back on it, it’s amazing what we accomplished,” said Louis Abramson, a CHNC board member and founding member of Hollywood Harvest. “We felt a real sense of urgency. We really did feel like if we didn’t make these calls and deliveries, something bad could happen to our neighbors.”

Over the following year, members met to brainstorm how best to continue Hollywood Harvest’s mission.

The new program still targets seniors with fixed incomes that need access to food, but now the nonprofit sources its meals from recovered food waste.

According to data from the Los Angeles Food Policy Council, over 1 million tons of food goes into L.A.’s landfills each year. To help cut that number down, Hollywood Harvest now recovers food from grocery stores, farms and distributors that didn’t sell and otherwise would have gone to waste.

“It’s as good as what they’re selling in stores; it’s just overstock,” said Spencer Hillman, a founding member of Hollywood Harvest. “We figured out there was an absolutely insane amount of waste, so now with this program, we can address food waste and food insecurity.”

Hollywood Harvest now partners with the Hollywood Food Coalition to keep the recovered food in a large refrigerated storage space at 1223 Vine St.

Each week, recipients are given a bag of raw ingredients to cook their own meals. Items in the bag differ based on what Hollywood Harvest is able to recover for the week, but volunteers try to ensure residents get a few items in each of the food groups.

“This is good because if people don’t like a prepared cooked meal, they might throw it out,” Abramson said. “Because we’re giving them raw ingredients, they’re getting healthier food than they normally would, and they can cook something they like that makes them feel good.”

In the future, Hollywood Harvest members hope to offer a supermarket that sells recovered food that are priced on a need basis. Anyone could shop there, but clients of Hollywood Harvest would essentially shop for free.

Abramson said he’d also like to put together a cookbook featuring recipes from clients as a way to build community, another key component of Hollywood Harvest’s mission. Abramson said that about 80% of the organization’s client base does not have a support system in their lives, and the organization has been able to step into that role.

“You’ve got to nourish the soul as well as the body,” he said. “The food does the body good, but the fact that we go into our clients’ homes and interact with them and call them every week, that does just as much good as the food.”

Though clients won’t receive a turkey in their Thanksgiving weekend bags, Abramson said they might receive some sweet potatoes or cranberries. As the organization grows, he said he hopes to be able to offer a more robust holiday service.

Individuals who are looking to volunteer during the holiday season and beyond can visit hollywoodharvest.org.