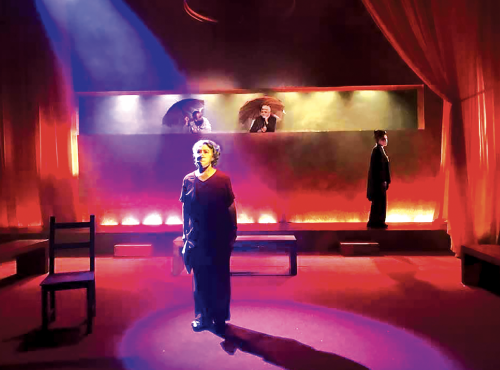 In addition to performances and panel discussions that will be open to the public, participating artists will work together in private workshops. RE:Encuentro 2021 follows on the heels of previous Latino Theater Company festivals, including a national Encuentro in 2014 and an international Encuentro de las Americas in 2017.

Streaming performances and panels can be experienced for free via Latino Theater Company’s online platform at latinotheaterco.org. The online event will run from Nov. 12 through Nov. 21.

RE:Encuentro 2021 kicks off at 6 p.m. on Nov. 12 with a streaming performance of “Whittier Boulevard,” a new ensemble-devised work-in-progress by festival host Latino Theater Company. Employing its trademark blend of comedy, drama, music, dance and theatrical magic, the company takes viewers to Los Angeles in the year 2042. Years of fires, torrential rain, anarchy and bloodshed have led to a totalitarian city-state where the elderly disappear and their stories are forgotten.

On the eve of her 75th birthday, faded Chicana starlet Veronica Del Rio enlists the help of her loud-mouth nurse, a kind-hearted policeman and a down-on-his-luck poet. Will Veronica find love before it’s too late?

The festival continues throughout the week with a variety of performances, including musical films, book-to-film adaptations and student-driven productions. All the films feature Latinx culture, history and artists.

Each of the public events will remain available to view on demand for 10 days following the initial festival streaming date.

Admission to all public events is free at latinotheaterco.org.

LACO returns to the stage