Festival of Lights is music to cantor’s ears 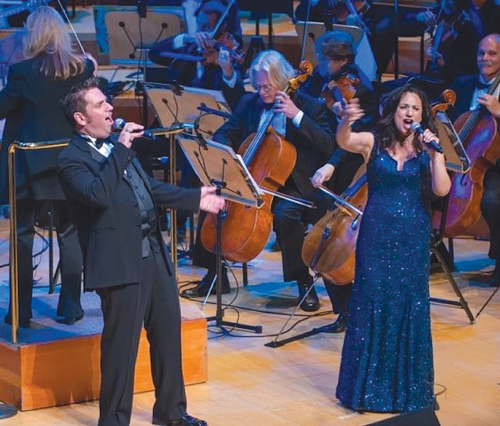 From the time she was young, Cantor Ilysia Pierce knew music was her calling. The New York native, whose family moved to the Los Angeles area when she was 10, said her late grandfather was a cantor, and she discovered a love for music as a teenager while attending Temple Beth Kodesh of West Hills, in the San Fernando Valley.

“That’s when I realized I have this love and passion for singing Jewish music and holiday music,” Pierce said. “I was listening to a cantor at the time and thought, ‘I can do this.’ It was very inspirational. I was maybe 14 or 15 and it really stuck with me.”

The music led Pierce to seek vocal training and after high school, she embarked on a professional theater and singing career, appearing in numerous productions and musicals such as “Beauty and the Beast,” “Fiddler on the Roof,” “Evita” and “Sweeney Todd.” Pierce performed on and off-Broadway and sang at concerts in the Walt Disney Concert Hall, Ford Amphitheater, Saban Theatre and Kennedy Center. While those accomplishments were significant and rewarding, Pierce said she was destined for something much bigger in the future.

In 1999, she attended services with Beverly Hills Temple of the Arts, led by Rabbi David Baron. Pierce said she found it inspirational and quickly joined the congregation, which owns and holds services in the Saban Theater. Unaware of her vocal prowess, Baron heard Pierce sing one day and encouraged her to pursue training as a cantor.

“That is when we started talking about it,” she said. “I said I had always wondered what it took to be a cantor. I sort of learned as I went. My congregation loves and supports me and it has been an amazing journey.”

Pierce became the cantor for Beverly Hills Temple of the Arts and sings at Shabbat services, bar mitzvahs, bat mitzvahs, weddings, concerts and other special events, as well as during High Holidays services. Baron has been supportive of her singing career and participation at the temple.

“Ilysia, from day one, was beloved by all of us. She is a very talented singer,” Baron said. “She sings with such passion and brings such energy to her songs. We are very fortunate to have her with us.”

Pierce recently recorded her first solo album, “Blessed,” which will officially be released in the coming weeks. Co-produced by the temple’s music director, Sharon Farber, and recording artist Sam Glaser, the album features the holiday song “There’s Something About Those Candles,” written by Sandy Sherman. Just in time for Hanukkah, which begins at sunset on Nov. 28, the song is currently available for listening on Spotify, Pandora and Apple Music.

“The messages in that song of light and coming together, and standing together as one, are very powerful,” Pierce said. “I have always thought that lighting the candles and bringing light into the darkness has such a beautiful universal message.”

Pierce will perform during the Temple of the Arts Hanukkah Celebration on Dec. 3 at the Four Seasons Hotel at Beverly Hills, 300 S. Doheny Drive. The first part of the event from 6:15-7 p.m. is free and open to the public and includes a candle lighting ceremony for children. A dinner and shabbat service begins at 7 p.m. and requires tickets and reservations. For information, visit.bhtota.org.

Pierce is also performing at the nonprofit StandWithUs’ “A Night to Honor Heroes” and Festival of Lights celebration on Dec. 5. The in-person event begins with a reception at 5 p.m. at the Wilshire Ebell Theatre, 4401 W. Eighth St. Reservations and tickets are required. The event will be livestreamed free at 7 p.m. at standwithus.com.