Farmer’s Daughter put out to pasture 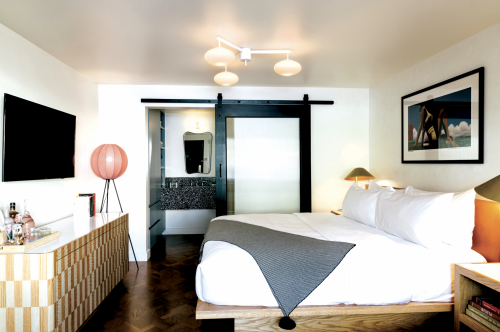 After a half-century on Fairfax across the street from the Original Farmers Market, the Farmer’s Daughter motel will be renovated into a 66-room boutique hotel and restaurant.

The hotel, located on Fairfax Avenue near The Original Farmers Market, is expected to open in early winter 2022. Reservations are available for stays starting on Feb. 14.

Named Short Stories Hotel, the boutique hotel will comprise 40 signature rooms, 24 junior suites and two grand studio suites spread among two buildings. The complex will also include a full-service bar and restaurant, a landscaped courtyard lounge, a pool and event spaces, according to proposals for the property.

The site is being developed and operated by Leo Grifka, of Grifka Group. Grifka, who has lived in the Beverly Grove neighborhood since 2015, purchased the hotel a few months ago.

“It’s always an amazing opportunity to be able to invest in your community,” he said. “I feel an added level of investment in this endeavor because of where I live. I’m a stone’s throw from the hotel, and I really want to do this well and do it right.”

The hotel draws its new name from the many authors and poets living in the area in the 1920s and ’30s. Such authors include F. Scott Fitzgerald, Raymond Chandler and Charles Bukowski.

“There is a historical aspect to the name,” Grifka said. “But also, when you stay at a hotel, you’re working on your own short story, and that’s what we want people to do – make memories with us.”

“I want to bring the hospitality experience back into hotels,” he said. “I want guests to be greeted at the door, handed a cocktail and walked to their room. It’s about giving the guests constant touch points to make sure they feel taken care of with an elevated level of hospitality.”

As part of the remodel, Grifka Group will rethink culinary options at the location. The former American comfort fare restaurant TART will be replaced with a destination restaurant headed by a known chef, though Grifka said it was too soon to announce the name.

“There’s a flexibility to do what we want,” he said. “We can put items on the menu that are in the strength of the chef and also push the boundaries to do things that are a little different.”

The restaurant will offer indoor and outdoor dining for breakfast, lunch and dinner, with brunch rolled out at a later date.

A more casual café will serve guests poolside and in the courtyard lounge, which Grifka said will be the heart and soul of the hotel. Three large trees accent the courtyard, which will be lined with marble tile throughout. A variety of potted plants will help create a canopy where guests can grab coffee, drinks or light bites.

“It’s going to be a really beautiful moment when people walk in off the bustling Fairfax and see this beautiful, secret garden,” he said. “It truly will be an oasis.”

The Farmer’s Daughter motel originally opened in the ’60s before passing through several owners. The motel’s French restaurant Pigalle made way for the trendy bar and restaurant Olive, which served politicians and celebrities. Actor Mark Ruffalo even worked there as a bouncer, according to Los Angeles Magazine.

Located across from Television City, the motel has long served guests of “The Price is Right.” In February 2017, the motel completed its last round of renovations, but eventually closed in June 2021.

Grifka said that as he takes control of the longstanding building, he hopes to bring an amenity that fits in with the character of the area.

“The property has been there quite some time, and we are the next stewards of it,” he said. “From what I’ve seen thus far, I think the community is going to be really happy with the final product.”