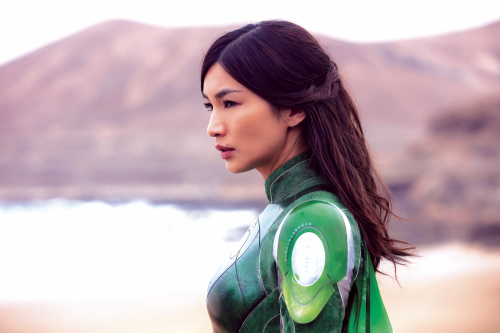 Gemma Chan stars as Sersi, an Eternal who has the ability to alter the molecular structure of all living matter. (photo courtesy of Marvel Studios)

Sometimes critics are a tiresome a bunch. That’s especially true when they unite in their hyperbole. We’ve seen this several times over the years; the gatekeepers of taste damning something enjoyable to an aggressive degree.

A digital space like Rotten Tomatoes should, in theory, present an accurate picture of a film’s quality across hundreds of professional reviewers’ perspectives. Whelp, Marvel’s “Eternals,” a film focusing on extraterrestrial immortals secretly molding human history, proves the system suffers a few flaws.

Sitting at 47%, this is the worst film in the Marvel Cinematic Universe, according to RT’s process. And yet, it’s hardly a terrible film, easily surpassing Marvel’s lowest ranked like “The Incredible Hulk,” the second two “Iron Mans” and the first two “Thors.”

Certainly, some things don’t work perfectly. For a film with such a star-studded cast, including Angelina Jolie as a warrior Eternal named Thena and Salma Hayek as team leader Ajak, they have so little to do. And as a loose origin story for a new superhero team protecting the planet from a new foe, the choice to cover several millennia overstuffs things.

Those issues are hardly unique to the MCU.

The critical ire seems a combo of hype and expectations. Hiring director Chloé Zhao, who won best director and best picture for “Nomadland” earlier this year, assumedly marked a shift. Perhaps the superhero blockbuster company is ready to loosen the reins, give auteurs more control. Early Marvel Studios sure didn’t roll that way. That doesn’t happen.

Perhaps more disappointing is how “Eternals” was marketed. The trailers hinted at a celestial story that transports Marvel into the cosmos. Not so much.

Instead, 10 Eternals ordered to fight a predatory species – Deviants, an objective they dare not veer away from by, say, fighting any other big bads from the last 22 films – must unravel a mysterious death in the ranks while Deviants and another illusive foe threaten the planet after a long rest simply living in the shadows.

To the film’s credit, the full rationale for why these folks never appeared in the 11th hour to help the Avengers is satisfying enough. Plenty of dissatisfaction follows. While Sersi (Gemma Chan, previously in “Captain Marvel” as a kinda unrecognizable minor villain) serves as the audience’s primary point of entry, her own heroic journey lacks a punch.

Until the explosive third act, things meander along, though declaring them entirely boring and terribly executed are complaints too far. “Eternals” should be better – forced humor particularly stands out – but it’s also not a complete failure, not even close. Other MCU entries come far closer.

Still having trouble with that 47%? Consider its audience score of 80%. This is especially notable considering RT users are quite aggressive in their disdain, previously tanking “Star Wars: The Last Jedi’s” audience score and attempting to do so for “Black Panther” prior to its premiere. So, this hostile digital space didn’t target “Eternals.”

Conversely, critics collectively went overboard. “Eternals” is no flop, instead sitting quite nicely next to mid-tier MCU flicks like “Captain Marvel” and “Guardians of the Galaxy Vol. 2.”

That might seem like a low bar for inclusion, but oh boy does Marvel seem entirely uninterested in love stories, despite how gorgeous and toned all its stars become for these films – comedian Kumail Nanjiani landed a Men’s Health cover for his absurdly cut physique.

“Eternals” also features Marvel’s first deaf superhero on screen, expertly played by deaf actor Lauren Ridloff (“The Walking Dead,” “Sound of Metal”). Her character Makkari is a speedster, and she enjoys the film’s best thrilling moments, though she doesn’t arrive for some time and hardly undergoes much of a story arc.

Putting aside the film’s faux failing grade, “Eternals” is decent but hardly lives up to what it could have been. At minimum, that’s a passing grade, alongside some points for effort. It’s a different Marvel outing to a degree, lacing flashbacks of human history throughout the film’s many mysteries.