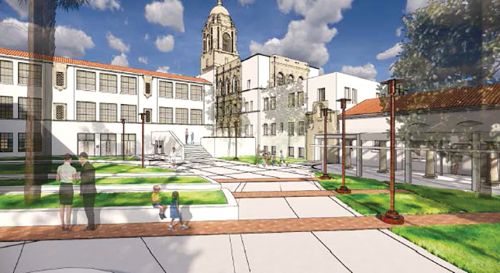 El Rodeo Elementary School is undergoing a modernization that called for the restoration of the building’s façade. (rendering courtesy of BHUSD)

The construction at El Rodeo Elementary School will take approximately two years longer than originally anticipated, as the Beverly Hills Unified School District now expects to reopen the campus in the 2023-24 school year.

As part of the district’s reconfiguration, the school is undergoing a modernization as it transitions from a K-8 to a TK-5 school. It closed in June 2019 and was expected to open in 2021.

However, “procurement issues” have occurred during the pandemic that have delayed construction, BHUSD assistant superintendent J. Wade Roach said. However, the work is approximately 40% complete, he said.

“A lot of the work has to do with seismic retrofitting, making sure the school is earthquake proof, and then, basically, the classrooms are going to remain the same,” Roach added. “The instructional program will change it a little bit since it’s no longer a 6-8, and that basically means that we’ll have to have more age-appropriate restrooms for our smaller kids or younger kids. There are some changes in the design based on that. Other than that, there’s not many changes.”

Additionally, the district is accommodating the community’s desire to retain the architectural integrity of the school, which opened in 1927 and is located at 605 Whittier Drive. Roach said work is ongoing to restore the building’s façade.

“That was important to the community, so there’s a lot of work being done toward that restoration,” he said, adding that the district is also restoring the school’s theater.

Currently, El Rodeo is not being used in any capacity. Temporarily, the district had housed its maintenance and operations department on the campus because of subway remediation issues at Beverly Hills High School, Roach said.

The BHUSD Board of Education voted unanimously last week to approve moving services to rehouse the department in the high school.

Further, the board approved an amendment to the district’s construction agreement with ProWest Constructors for the retrofit and modernization project with a total cost not to exceed $125 million.

According to the board agenda, the vote last week authorized Phase 7, which will cost a maximum of $6.7 million and be paid for using Measure BH funding. Measure BH was approved by voters in 2018 and authorized the issuance of $385 million in bonds for school repairs. 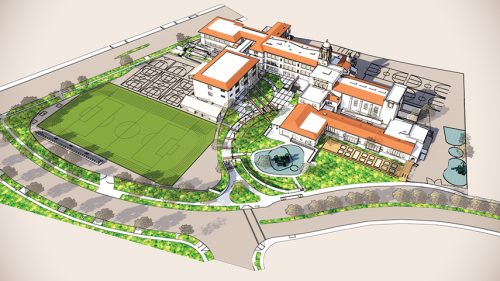 When the school closed in 2019, the majority of students transferred to Hawthorne Elementary School or Beverly Vista Middle School. When El Rodeo Elementary School reopens, Hawthorne will likely find a new use, Roach said. Early discussions have indicated the possibility of converting it into an early education center or using it as a location for some adult classes, he said.

“They’re looking at different options about the use of Hawthorne, and some of that may require a little bit of modernization,” Roach added. “The board has said that they only need to operate two elementary schools.”

He said the modernization project at El Rodeo Elementary School had an initial budget of $153 million, and the district has spent approximately $65 million thus far.

“Students are going to get a brand-new, modernized school,” Roach added. “There’s a lot of excitement growing about reopening.”

Dustin Seemann, the district’s assistant superintendent of education services, said that having “state-of-the-art” facilities similar to those at Horace Mann Elementary School, which has been modernized, will “enrich learning” for students.

“We are thrilled at the prospect of offering a more collaborative learning environment with open learning spaces for project-based activities,” he said.

“Seeing the conceptual plans for El Rodeo Elementary School become a reality is very exciting. Just last week, we started reviewing the best furniture options; the innovation in educational furniture is incredible. We continue to meet with the construction teams to make decisions that will support each student.”