Council motions all over the map 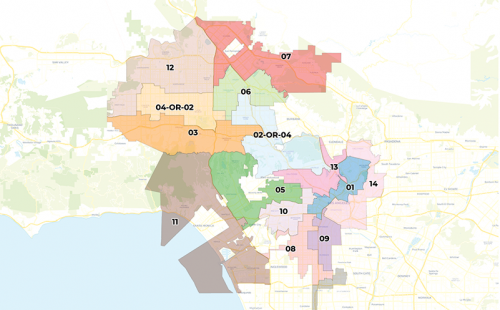 The commission’s map has drawn criticism from some members of the council and support from others, and left in question the future of Councilman Paul Krekorian’s 2nd District and Councilwoman Nithya Raman’s 4th District.

The redistricting commission created two new districts called “2 or 4” and “4 or 2,” both of which are primarily in the San Fernando Valley. The potential 4th District would have a southern border of Franklin Avenue in Hollywood. The Miracle Mile, Hancock Park, Windsor Square and Larchmont Village were moved from the 4th District to the 5th District on the commission’s map. The proposed 13th District includes most of Hollywood and neighborhoods north of Fountain Avenue to Hollywood Boulevard currently in the 4th District.

Council members also submitted 38 motions on Nov. 2 to change district boundaries established in the independent redistricting commission’s map. The changes would affect many different parts of the city, and the Ad Hoc Redistricting Committee will deliberate whether to alter the boundaries before sending them to the full council for review. The process is expected to take several weeks and must be completed by the end of the year.

One motion by Martinez asks the city legislative analyst to create an alternate map with minimum changes to current district boundaries. The boundaries of that map, which has yet to be created, would also be reviewed by the ad hoc committee.

Raman introduced nine motions to be considered by the ad hoc committee that would keep portions of Hollywood, Hancock Park, Windsor Square and the Miracle Mile in the 4th District. Neither the councilwoman, nor her office,  returned requests for comment. She said during the Nov. 2 council meeting that the redistricting commission caused confusion by not identifying which areas would be the 2nd and 4th districts, which disenfranchised residents in many neighborhoods currently in her district.

Krekorian, whose district could potentially be moved west from North Hollywood to a new area in the Canoga Park and Winnetka communities, was also critical of the commission.

“To me, it’s quite clear that the public did not have sufficient opportunity to really evaluate all of these steps that went into creating an entirely new district,” he said. “There may be great things in this process for the rest of the city, but this one thing of creating these two districts that the commission couldn’t even decide who should represent, is alone enough to revisit the entire drawing of the map of the San Fernando Valley.”

Los Angeles City Council Redistricting Commission Chair Fred Ali defended the final map and said the commission maintained transparency. The commission grouped similar communities of interest together throughout the city while creating a new district, “2 or 4,” to represent the San Fernando Valley, which now constitutes 38% of the city’s population according to 2020 U.S. Census data. Ali said more than 6,300 people participated in public hearings and 1,450 speakers offered testimony during the commission’s proceedings. Thousands more submitted written testimony, bringing the total number of people providing input to more than 15,500.

“Our recommended map is the product of unprecedented public participation. It involved more input than ever before,” Ali said. “For the first time in the city’s history of the redistricting process, we drew map lines in real time. This public line drawing and redrawing allowed the commission and the public to witness even minor changes, giving a clear picture for all to see the intricacies that characterized this process. I truly believe the process we used can be a model for a future commission.”

O’Farrell did not elaborate on his opinion of the commission’s map, but expressed gratitude at being selected for the ad hoc committee.

“We have a lot of work to do, and I look forward to serving as vice chair of the City Council’s Ad Hoc Redistricting Committee,” O’Farrell said.

Koretz said he supports the way the commission’s map was drawn and is eager to join the ad hoc committee for deliberations.

“We are pleased with the current draft iterations. However, until it goes through the final City Council process, we can be sure to expect significant changes that will cause reallocations and rebalancing that will, in turn, affect other areas,” Koretz said. “All of the commissioners did a tremendous job gathering data, outreaching to the community, sorting, analyzing and implementing public comments, and we are grateful for their tireless work.”

“There are so many changes proposed, it’s hard to tell what the motions are and what will be accepted,” said Cindy Chvatal-Keane, president of the Hancock Park Homeowners Association. “We’ll just see. I just think after all these months and all these people giving community input and statements, to have them come in and change things, it’s disheartening.”

Frieze Week in BH it is