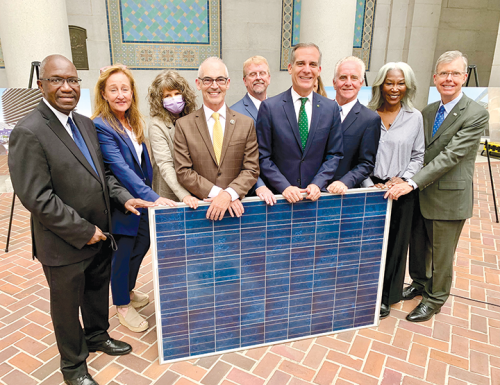 “We recently adopted the ‘LA100’ goal of 100% renewable energy by 2035, and I noted that this was not simply aspirational, but a work plan for a world in trouble,” said O’Farrell, chair of the council’s Energy, Climate Change, Environmental Justice and Los Angeles River Committee. “This unprecedented, coordinated investment between the Department of Water and Power and many city agencies will transform Los Angeles. It takes leadership at the local level to steer the second-largest U.S. city and economy, and this initiative sets the standard for how municipal governments must address the climate crisis.”

The motion instructs the city administrative officer and chief legislative analyst to report on recommendations for a sustainable, year-to-year municipal solar and storage program involving all city departments. The motion also instructs that an assessment be conducted of solar generation potential at municipal facilities, that up to 25 facilities citywide be identified for potential solar projects and that departments report on staffing and other needs.

“The motion the council approved puts the city firmly on track to realizing its official goal of 100% clean energy by 2035,” Krekorian said. “The action is further proof that the council and mayor have made an unprecedented commitment to a clean future, which is especially noteworthy when world leaders gathered at the U.N. Climate Summit in Glasgow. Over time, the installation of solar will also save the city millions of dollars by directly producing power onsite.”