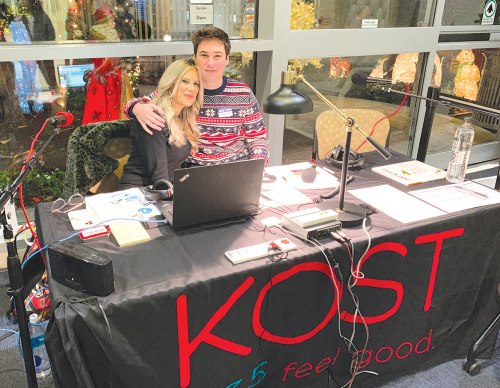 Ellen K and her son, Calvin, celebrated Giving Tuesday at CHLA in 2019. (photo courtesy of CHLA)

Giving Tuesday, a global day of philanthropy, will commence on Nov. 30, and families, patients and staff members at Children’s Hospital Los Angeles are preparing for their moment in the spotlight.

It also serves as a fundraiser. In the six years of the partnership between KOST and CHLA, organizers have raised approximately $1 million to benefit research and equipment upgrades at the hospital, said Monica Rizzo, one of the event organizers.

“That first year – we still kind of laugh as we think back to how we pulled all that together in three weeks’ time,” she said. “It’s just kind of snowballed. Everybody was all-in from the start.”

Rizzo said CHLA’s Giving Tuesday celebration began several years ago with a chance encounter with Ellen K, of The Ellen K Morning Show. She said CHLA staff members discussed the possibility of promoting the hospital on the show, and the idea blossomed from there. And it continues to grow.

Ellen K said she was introduced to CHLA in 2016, when her son, Calvin, was injured in a high school football game. He was sent to the CHLA emergency department, and doctors said he would require surgery.

“As a mom seeing her son in pain, I was a wreck,” Ellen K said in a statement. “When we were at CHLA for Calvin’s surgery, everyone was so positive and so on top of everything that I knew he was going to be all right. It was incredible how they took care of our whole family. I had driven past CHLA for years and never knew the magic that went on behind its doors. It was literally in my backyard, but I didn’t know about it because we never needed it.”

She said she is pleased to give back to the hospital, especially given the treatment her son received. Ellen K said Giving Tuesday has been a great way to express her gratitude.

“We were so touched by the outpouring of support from our listeners that first year, we couldn’t wait to do it again and again,” she added. “Now, it’s our favorite day of the year, where we get to meet some amazing people who do amazing things and give back to this hospital that has touched so many.”

In past years, the hospital’s lobby has been full of excitement during Giving Tuesday, with the radio show broadcasting the celebration from CHLA facilities on Sunset Boulevard. This year’s installment will be held virtually, but it will still offer plenty of fun and heartfelt moments with CHLA families, Rizzo said.

“The stories are just so incredibly inspirational,” she added.

Several sponsors have joined the cause to match the donations received during Giving Tuesday up to $125,000. Individuals who donate $35 or more on Nov. 30 will provide a My Hand in Yours blanket to a patient at CHLA. Curtis, a big supporter of the hospital, founded the organization in 2020 and donates 100% of the proceeds to CHLA.

“She’s just so dedicated to helping the hospital and raising awareness and championing those most vulnerable patients that need the life-saving care that CHLA provides,” Rizzo said.

Further, Porto’s Bakery and Café and Trejo’s Tacos will donate a portion of their sales on Nov. 30 to CHLA.

Festival of Lights is music to cantor’s ears