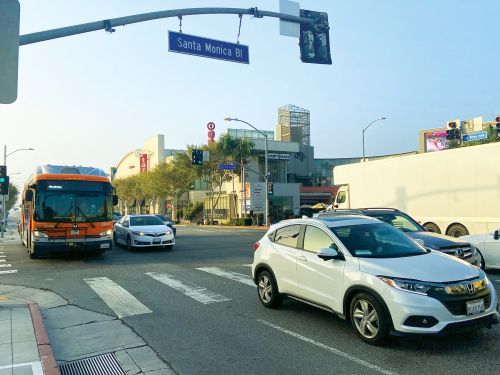 Vehicles would be restricted from traveling in curbside lanes on La Brea Avenue during rush hour periods under a proposal by Metro. (photo by Edwin Folven)

Curbside bus-only lanes may be coming soon to La Brea Avenue through a plan proposed by the Los Angeles County Metropolitan Transportation Authority.

Metro held a webinar on the La Brea Avenue Bus Priority Lanes Project on Nov. 16 and outlined details of the proposal. The curbside lanes along La Brea Avenue between Coliseum Street and Sunset Boulevard would be converted to bus-only lanes during rush hour periods from 7-10 a.m. and 3-7 p.m. Other vehicles would be allowed to enter the lanes to make right turns, but otherwise would be restricted. The lanes would be restriped indicting they are for buses only.

James Shahamiri, senior manager of engineering for Metro, said buses would run every seven to eight minutes on the designated lanes during peak commute times. The buses currently run every 15 minutes. The new lanes would reduce commute times by five minutes along the 5.9-mile route.

The La Brea Avenue Bus Priority Lanes Project would also improve connections between the Expo Line to the south and Red Line subway to the north, he said. The lanes will also provide better service once the Purple Line Extension project opens in 2024 with a new subway station at Wilshire/La Brea.

Julia Brown, senior manager of community relations for Metro, said the new bus lanes will improve public transportation for people from disadvantaged communities who solely rely on the buses. She cited a Metro survey that found eight in 10 bus riders are people of color, nine in 10 live in a household with total earnings below $50,000 per year and six in 10 earn wages below the poverty line.

The new bus-only lanes would be located on a major corridor for people traveling to jobs in Hollywood and West Hollywood, and connecting to public transportation providing access to Beverly Hills to the west, and Koreatown and downtown Los Angeles to the east. Approximately 100,000 people live within walking distance of the route and 40,000 jobs are in close proximity, Shahamiri said.

The La Brea Avenue Bus Priority Lanes Project also meets objectives for more public transportation options outlined in Los Angeles’ New Green Deal and Mobility Plan 2035, as well as West Hollywood’s Pedestrian and Bicycle Mobility Plan. The bus-only lanes would primarily be in Los Angeles but would run through a three-block section on the east side of West Hollywood between Romaine Street and Fountain Avenue.

The proposal is backed by the transportation advocacy organization Streets for All and the Mid City West Neighborhood Council, which approved a motion of support last week. The Mid City West motion asked Metro to consider extending the bus-only lanes north to Hollywood Boulevard, but Shahamiri said La Brea Avenue is more narrow between Sunset and Hollywood boulevards and could not accommodate dedicated bus lanes without forcing traffic lanes to be reconfigured.

Under the current proposal, La Brea Avenue would still have two lanes of regular traffic running north and south, and the lanes would not significantly reduce travel times for motorists.

Metro is planning to continue developing the project and will prepare final design plans through the end of the year. The goal is to implement the bus-only lanes in spring 2022.

Members of the public can continue to provide input by calling (213)922-4869. For information, visit metro.net/labrea.