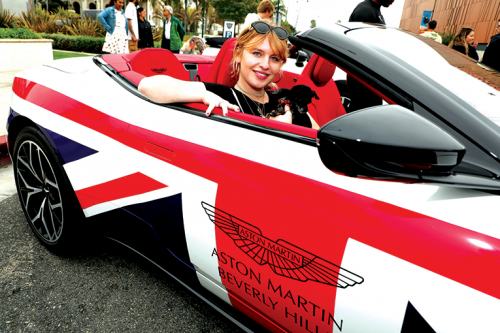 As a part of BritWeek, cars of the U.K. will parade through the streets of Beverly Hills. (photo courtesy of Brit Week)

Co-hosted by the Petersen Automotive Museum, celebrity car collector and artist Magnus Walker and the city of Beverly Hills, 75 of the world’s most iconic British automobiles will parade through the streets of Los Angeles and Beverly Hills, offering audiences the opportunity to witness a unique gathering of vehicles.

Select cars scheduled to appear include Steve McQueen’s 1956 Jaguar XKSS, one of only two 1947 Rolls Royce Inskips ever made, a 1948 Bentley MK VI Mallalieu Mercia Roadster, an original 1962 Lotus 7 and a 2005 TVR Sagaris, the only one in the U.S.

“We’re looking forward to bringing together car enthusiasts of all backgrounds for this thrilling occasion,” said Nigel Daly Officer of the Order of the British Empire and chairman of BritWeek. “The UK has a long history of thriving in the automotive industry, so it’s a great experience to share our finest offerings with thousands of SoCal residents.”

The free and family-friendly gathering begins with a British-themed breakfast on the Petersen Museum’s rooftop, where the public is invited to view all of the cars up close as they compete for the “Petersen Perfection,” “Best in Show,” “Hammertime Excellence” and “Outlaw” awards. The rally will begin afterward on a route to the Wallis Annenberg Center for the Performing Arts, where the cars will be on display in front of Beverly Hills City Hall, and patrons can engage in other on-site activities.

“We’re excited to partner with BritWeek, Magnus Walker and the city of Beverly Hills in this showcase,” said Terry Karges, executive director of the Petersen Automotive Museum. “It’s not often this assembly of cars comes together, so we encourage everyone to start their holiday season a few weeks early and treat themselves to a fun time.”

For more information and a map of the rally, visit britweek.org or beverlyhills.org/britweek.