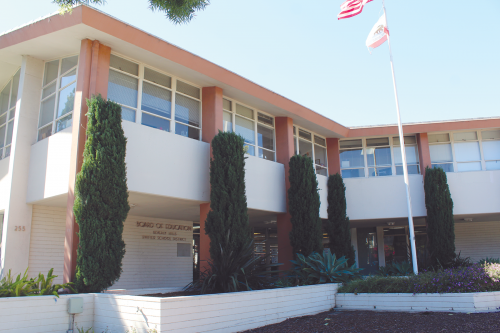 The Beverly Hills Unified School District Board of Education has until Nov. 21 to appoint a new board member. (photo by Brynn Mechem)

The Beverly Hills Unified School District Board of Education interviewed candidates for its vacant board seat on Nov. 2, but it did so with one less candidate than originally approved.

The board on Oct. 19 made a clerical error in adding former school board member Howard Goldstein to the group of candidates the board would interview, president Rachelle Marcus said.

She said she reviewed tape of the meeting and realized that only one board member had voted for Goldstein. Candidates had to receive three votes in order to qualify for an interview in the custom process the school board utilized to filter potential board members.

“It does not seem fair that a person that had one vote is going to be going forward,” Marcus said.

During the Oct. 19 meeting, the board president said she could not support Goldstein being appointed to fill the vacancy.

“He’s got the experience and everything else, but there are some things that happened before with me, and I cannot vote for him,” Marcus said. “This is more something he said when he left the board and something that happened when I ran for the board, so I have a very negative feeling about that at this point.”

She did not elaborate, and Goldstein did not respond to a request for comment.

According to his application, Goldstein, an attorney, served on the board from 2013-18 and was president twice. He is the chair of the BHUSD Facilities and Construction Committee and a member of its Citizens Construction Advisory Committee.

It appeared that at least two board members supported Goldstein. Board member Amanda Stern said he was an “amazing, amazing source of knowledge” on Oct. 19.

“He is a tireless and committed member,” she said. “Again, I think his temperament is also a good fit for us.”

Board member Noah Margo said Goldstein and attorney/advisor Judith Friedman were the best applicants on paper “by far.”

“I served with him,” Margo said. “It should be known that Howard and I disagreed on the single most important vote in the last decade, and that is creating a middle school, so if people think that we’re somehow aligned because we work together, we actually voted differently on that. It speaks volumes that we were able to work together and even disagree, and that’s very important to have on the board.”

“I also apologize on behalf of our board … to Mr. Goldstein for the error that was made,” Vice President Mary Wells said. “I do appreciate Mr. Goldstein, as well as all of the other candidates that have put their name in the hat and filled out applications and are willing to consider being on the board for this short period of time.”

The seat became vacant after former board member Tristian Walker-Shuman abruptly resigned in September amid questions about her residency. The new board member will serve through the next regularly-scheduled election in November 2022.

The public can still petition the Los Angeles County Office of Education to hold a special election to fill the vacancy.