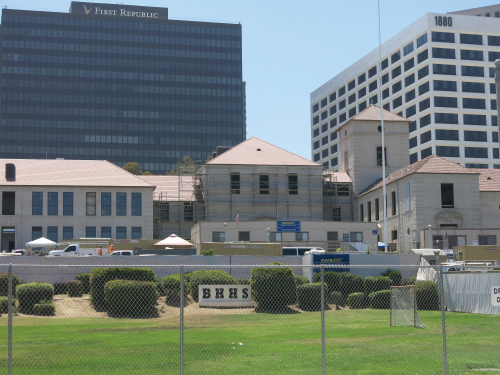 A budget shortfall in its construction program has led the Beverly Hills Unified School District Board of Education to rethink how it wants to move forward in implementing the master plan the board approved in 2012.

Following presentations by the district’s bond manager Team Concept Development Services Inc. in which the company expressed concern about the program’s budget, the board voted to table a contract renewal with DLR Group, the architectural and engineering firm modernizing Beverly Hills High School’s south site.

Given the budget shortfall identified by TCDS, the district should “take a break” and “see what’s going to happen,” President Rachelle Marcus said. Superintendent of Schools Michael Bregy said the district typically approves such items “expeditiously,” but he wasn’t aware of any deadline for board action.

“I would like to make sure that we’re finishing up what we’ve started … but I personally cannot vote for this,” Marcus said.

During a board study session in October and a Facilities and Construction Committee meeting last week, TCDS representatives cited several factors that have led to the district’s need for an additional $130 million to finish its remaining projects.

Much has changed since 2017, when the board contracted with TCDS. The company’s program manager, Pam Johnson, said project alterations, market prices, subway construction and unforeseen dilemmas, such as the fire service line rupture at the former Venoco facility at BHHS that flooded the area, have impacted the program.

Perhaps most notably, construction costs have increased approximately 22% since 2018, and they are expected to increase another 20% over the next two years, Johnson said.

“We’re just now in a market that none of us has seen in our careers,” she added.

As of October, the district had several projects ongoing. Contractors are modernizing El Rodeo Elementary School. Two buildings on the BHHS campus – B3 and B4 – are also being modernized. Some other projects, such as proposed work to the BHHS’ south site, have been submitted to the Division of State Architect for review.

According to the DLR Group contract proposal, the updated scope of work at BHHS includes the design of the baseball/softball fields, the track/football field and the demolition of the Konheim Gym, as well as the design of the grand lawn and perimeter fencing on the campus’ eastside.

“When I look at the scope of this work, it seems pretty extensive,” Vice President Mary Wells said. “And given the last update that we had on the budget and the master plan – we spoke about how now would be a good time to take a pause to determine what is the best way to move forward with the construction program. I wouldn’t want to impede the progress of the projects that we already have in place.”

She suggested that the board discuss the item again at a future meeting. In the interim, she suggested reaching out to the district’s facilities department to discuss “how to move forward on that bigger picture.”