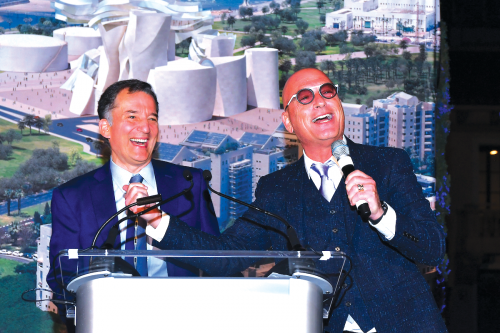 The gala celebrated architect Frank Gehry’s design and vision for the museum, and honored three individuals for their commitment to the WJM project.

Asper announced that more than half of the construction budget had been raised and plans are on track to lay the museum cornerstone in 2023. The gala raised more than $1.4 million.

“As we move closer to the fulfillment of our vision for the World’s Jewish Museum, I am convinced that we are building an iconic, one-of-a-kind gathering place that will become a destination jewel in Tel-Aviv,” Shauna Shapiro Jackson, executive director of AFWJM, said. “This will be a place to celebrate the impact the Jewish people have had on the world through the ages and to inspire future generations for years to come.”

The World’s Jewish Museum will be an immersive experience, part of a complex that will include a cultural and entertainment center. Designed by Gehry, the museum will celebrate contributions that the Jewish people have made to the world.  Situated on the bank of the Yarkon River and overlooking the Mediterranean Sea, the museum will serve as a cultural hub in Tel Aviv.