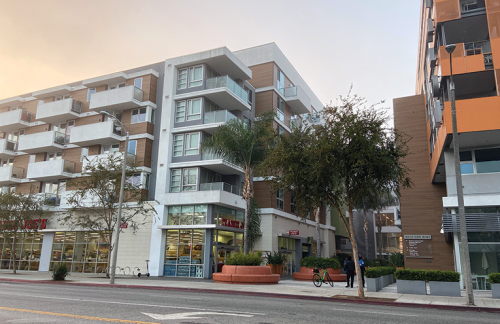 A woman in her 20s was shot and killed on Oct. 28 in an apartment building on Santa Monica Boulevard. (photo by Edwin Folven)

Detectives from the Los Angeles County Sheriff’s Department’s Homicide Bureau are searching for clues in the fatal shooting of a woman on Oct. 28 in an apartment building at 7316 Santa Monica Blvd. in West Hollywood.

Deputies from the West Hollywood Sheriff’s Station received 911 calls at approximately 7:30 p.m. about gunfire at the six-story, 371-apartment building. They found the female adult victim lying in a sixth-floor hallway suffering from a gunshot wound to the upper torso. The victim was taken to a hospital where she was pronounced dead, authorities said.

Lt. Brandon Dean, of the Sheriff’s Department’s Homicide Bureau, said no motive has been established and no suspects have been arrested. He said the female victim is believed to have been inside an apartment on the sixth floor, but authorities are still working with the building owners to determine who lives there and who may have been inside when the shooting occurred.

“We believe it is connected to people staying at one of the units,” Dean said. “There were several people hanging out in one of the apartments.”

The victim was not identified pending notification of next of kin. Dean described her a Hispanic woman in her 20s. He said investigators are in the process of reviewing security camera footage from the building and surrounding neighborhood.

A sixth-floor resident of the building who asked to remain anonymous said he didn’t know about the circumstances of the murder but is concerned about how easy it is to get inside the property. The resident said there are two security guards stationed at the apartment building, and an electronic key fob is required to enter the lobby and elevators, but people frequently let in others without verifying who they are.

Dean urged anyone with information to call the Los Angeles County Sheriff’s Department’s Homicide Bureau at (323)890-5500. Tips may also be made anonymously to Crime Stoppers by calling (800)222-TIPS or visiting lacrimestoppers.org.