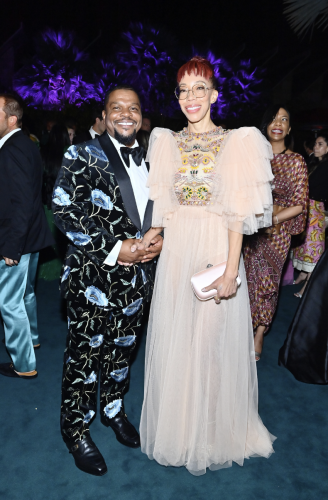 Kehinde Wiley and Amy Sherald were honored at the 2021 Art+Film Gala. (photo courtesy of LACMA)

Notables from the art, film, fashion and entertainment industries joined together at the Los Angeles County Museum of Art on Nov. 6 to honor Amy Sherald, Kehinde Wiley and Steven Spielberg at the Art+Film Gala.

LACMA trustee Eva Chow and actor Leonardo DiCaprio have championed the museum’s film initiatives since 2011, and they continued their efforts as the 2021 Art+Film Gala co-chairs.

This year marked the 10th anniversary of Art+Film, and sponsor Audi provided a fleet of fully-electric vehicles for the gala.

Soul singer Celeste performed before the awardees were honored.

Wiley is an American artist best known for his portraits that render people of color in the traditional settings of old master paintings. Sherald reengages with the history of photography and portraiture to invite viewers to participate in a more complex debate about accepted notions of race and representation.

The gala celebrated the opening of “The Obama Portraits Tour” and the “Black American Portraits” exhibit. Sherald’s painting “Michelle LaVaughn Robinson Obama” and Wiley’s painting “Barack Obama” will be on view at LACMA through Jan. 2.

Get into the holiday swing at Dodger Stadium