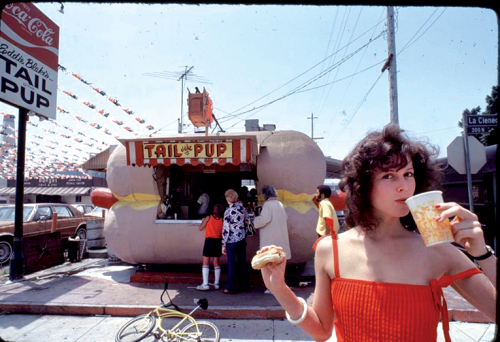 The Tail O’ the Pup stand will open on Santa Monica Boulevard after being closed for 16 years. (photo courtesy of 1933 Group)

For almost 60 years, motorists cruising down La Cienega or Beverly boulevards were met with an unusual sight — an 18-foot hot dog oozing with bright yellow mustard.

It wasn’t an edible frankfurter, but a staple of the city. Beginning in 1946, Tail O’ the Pup served up delectable dogs and mouthwatering French fries. Functioning under the catchphrase “Tasty hot pups – you’ll like ‘em,” the stand was visited by a long roster of celebrities and musicians until it closed in 2005.

Now, however, thanks to fortuitous timing and a development group focused on preserving Los Angeles’ landmarks, the icon will return to the streets of L.A.

As he prepares to reopen the stand, developer Bobby Green remembered seeing it for the first time at the age of 10 after his family moved to Los Angeles.

“I just thought it was the coolest thing, the same way I thought the Chinese Theatre was cool or the Hollywood Sign was cool,” Green said. “It was just one of those places that really stood out so much. Even if you never went there, you remember it because it was a giant hot dog – you couldn’t miss it.”

Throughout his teenage years, Green ate many hot dogs there and when the stand closed, he followed the several attempts made to reopen it.

Eventually, the family that owned the stand decided to donate it to Valley Relics Museum, which is owned by one of Green’s friends. While it may have been a good fit for the museum, that idea didn’t sit well with Green, and he was intent on re-opening the hot dog joint.

Green and his partners in 1933 Group, Dimitri Komarov and Dmitry Liberman, who were also behind the reopening of Formosa Café on Santa Monica Boulevard, purchased the stand in 2018 and began restoring it.

Despite the fact that the plaster hot dog was built at the end of World War II, it was in remarkable shape, Green said. With a little sparkle and spit polish – or paint – the dog was almost as good as new.

Though the restoration was light, the remodel isn’t the group’s first foray into historic preservation. Previous restoration projects include Idle Hour, located in a building shaped like a giant whiskey barrel, and Highland Park Bowl, the city’s oldest bowling alley.

The stand marks the group’s fourth landmark restoration, its 11th venue in L.A. and its first fast-casual dining destination.

Green said the group continues to tackle historic projects to ensure L.A. still has icons on which to look back.

“These legacy buildings provide a string of comfort,” he said. “You know the place is there for you like it was for your parents or grandparents, and you know it’s going to be there for your kids. It helps provide some sanity in a world that is constantly changing.”

The hot dog stand is one of the city’s few remaining examples of programmatic architecture, a type of architecture in which buildings are given unusual shapes for the purpose of advertising.

“People began to think outside the box to try to get motorists to take notice,” Fine said. “These structures would hopefully make the driver want to turn off the road and spend some money.” 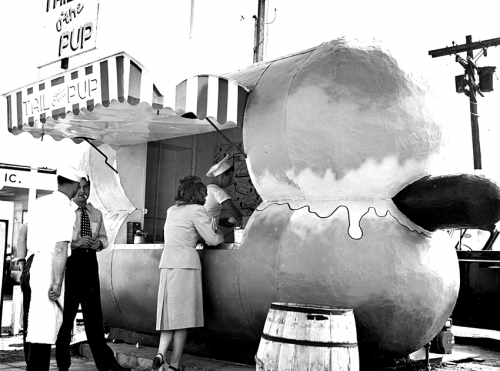 That’s why, Fine said, new projects that reimagine programmatic structures, such as Tail ‘O the Pup, are important to preserving the history of the city.

“These buildings are part of the L.A. story, and we don’t get to pick and choose our icons,” he said. “Programmatic architecture is legitimate, it’s part of the story of L.A. and car culture and how the city evolved. That’s the beauty of it – these buildings embody a story.”

Though 1933 Group has owned the stand for several years, the owners waited for the right location before relaunching. After many years of looking, the group finally selected 8512 Santa Monica Blvd. in West Hollywood, just a few blocks away from its original location at La Cienega and Beverly boulevards.

The new iteration will serve classics from decades past, including menu favorites from the ’40s, ’70s and ’80s. However, one new concession will be made: the addition of a beer garden on the 2,700-square-foot property positioned along Route 66.

“We’re not creating anything new. No sense changing a good thing,” Green said. “And as much as I love hot dogs, there’s nothing that goes better than a cold beer.”

The restaurant, which is being built on a lot already zoned for restaurant and alcohol sales, is expected to open in spring 2022, and Green said he hopes to bring more than hot dogs to the community.