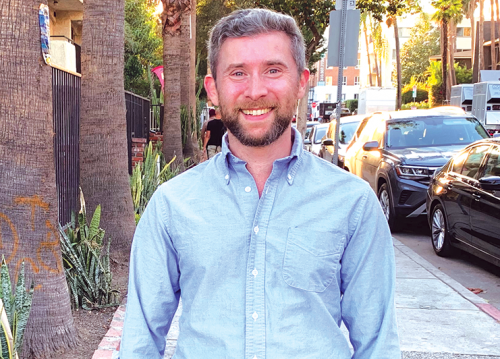 Louis Abramson has worked to bring care to individuals experiencing homelessness and food to seniors during the pandemic. (photo courtesy of Louis Abramson)

As an elected representative on the Central Hollywood Neighborhood Council, Abramson has fused his 12 years of scientific training as an astrophysicist with a commitment to helping his neighbors stay in or get into housing.

After feeding seniors, coordinating a homeless count, and serving on two nonprofits, he said he is running for Assembly to give his community the support it deserves.

Abramson earned his PhD in astrophysics from the University of Chicago and then moved to California for postdoctoral research at University of California Los Angeles before joining the Carnegie Observatories as a fellow. He said his work as a scientist has helped prepare him for a role in politics.

“Being a scientist has taught me to look at a problem carefully, dig into the data and ask the right questions,” Abramson said. “Science is a tool I use to map out complicated systems and understand why things happen. It helps me break daunting problems into manageable pieces and find solutions.”

As the chair of CHNC’s Homelessness Committee, Abramson brought the SELAH Neighborhood Homeless Coalition’s neighbor-to-neighbor street outreach to Hollywood. He became a founding board member of Hollywood4WRD, a coalition of residents, service providers and business leaders dedicated to ending homelessness, where he coordinated a grassroots homeless count after LAHSA canceled its 2021 census.

When the pandemic began, Abramson led an effort to ensure that every senior in Hollywood had enough to eat. Organizing hundreds of volunteers, the effort brought an estimated 32,000 pounds of fresh fruit and vegetables to more than 700 seniors.

The effort led to the creation of The Hollywood Harvest, a nonprofit where Abramson serves on the founding board.

As an assemblyman, Abramson said he would focus on providing care to individuals experiencing homelessness, building more affordable homes, rebuilding the social safety net and emitting less carbon. He has received endorsements from Kerry Morrison, Arnali Ray and Ferris Wehbe.