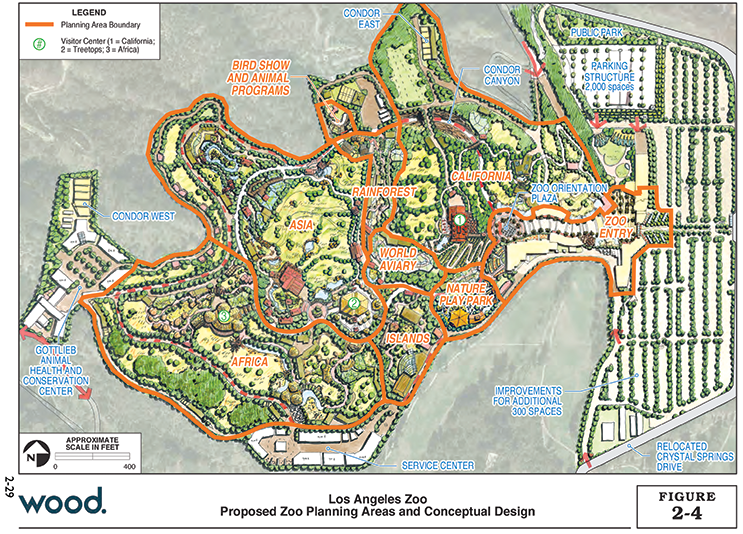 A $650-million expansion plan for the Los Angeles Zoo has received pushback for a proposal to create new attractions on land currently covered by native plants and trees.

The expansion plans are outlined in an environmental impact report that is currently under public review before being sent for consideration by the Los Angeles City Council. The zoo is proposing major changes to its 133-acre campus that administrators said will attract more visitors and allow it to better compete with other attractions such as theme parks.

Although the proposal calls for an expansion entirely within the zoo’s property, it involves potentially creating new spaces on approximately 23 acres of undeveloped land that is currently covered with coastal sage scrub, chaparral, and southern oak and walnut tree woodlands. Among the project’s objectives are the creation of better environments for the animals and the modernization of exhibit spaces, according to a project description in the EIR. Zoo administrators hope to increase education and conservation programs and bring new amenities to enhance the visitor experience. The project is projected to increase annual visitation by approximately 1.2 million people.

The plan, which aims to have major components finished in time for the 2028 Los Angeles Olympic Games, would be implemented in phases that will require step-by-step approvals from the Los Angeles City Council. The proposal will first go before the council’s Arts, Parks, Health, Education and Neighborhoods Committee at a date to be determined prior to review by the full City Council.

Initial phases include improvements to the zoo’s entry plaza, parking lot and external roadways, as well as expansions of the California, Rainforest, Asia, Africa and Nature Play Park exhibitions. Longer-term goals include a world aviary space for bird show and animal programs and a 2,000-space parking structure on the northern portion of the zoo’s parking lot.

A two-story 18,000-square-foot Yosemite lodge-style California Visitor Center would be stepped into the hillside where some of the undeveloped land currently exists and will feature full-service dining, classrooms and event rental spaces, according to the EIR. The proposal also includes plans for a Condor Canyon attraction that would be cut through an existing ridgeline to depths of up to 60 feet, the report states. A pathway through the canyon would be part of a continuous walking path to improve visitor circulation throughout the zoo. A new visitors center and an aerial tram and funicular to transport visitors would also be included, according to the report.

Los Angeles Zoo Director and CEO Denise Verret was not available for comment, but the zoo’s Acting Communications Director Carl Myers provided information on the plan.

“In 2016, the Los Angeles Zoo started developing our Vision Plan as part of the process of bringing much-needed upgrades to our campus which includes many 1960s-era facilities,” a statement from the zoo read. “A fundamental driver of the Vision Plan is to improve animal welfare and expand our conservation impact, while also ensuring a meaningful visitor experience that will result in a lifelong love of wildlife and the intergenerational stewardship capacity necessary to ensure species survival in the face of climate change and unprecedented biodiversity loss.”

Friends of Griffith Park, an organization dedicated to preserving the native parkland around the zoo, supports expansion but believes it can be done without destroying native woodlands on zoo property. Members fear up to 227 trees may have to be removed from the undeveloped areas near the hillsides northwest and southwest of the zoo’s current public spaces.

“They are eliminating or substantially altering native habitat,” said Gerry Hans, president of Friends of Griffith Park. “We think they can do plenty without destroying the native habitat.”

Hans stressed that the Friends of Griffith Park supports a plan called Alternative 1 in the EIR that reduces the scope of the project. The alternative removes the Condor Canyon portion of the project, the funicular and the California Visitors Center.

“We want to be on record that we really support the very top care for the zoo animals,” Hans added. “The full plan does that and the alternative plan does that. The alternative meets the goal of becoming a world class facility. It does reduce the scope of the project.”

Dozens of people have posted messages on the Friends of Griffith Park website regarding the zoo’s proposal, with many opposing plans to expand into undeveloped parts of the property.

“[I] was outraged at the potential for less park area,” said a post by Elena de la Cruz. “I just became a member thanks to seeing your efforts to stop this. Angelenos, including the non-human ones, need [Griffith] Park intact. We have enough entertainment activities as it is, we don’t have enough park spaces.”

“People understand the simple reality – this zoo resides in the largest urban wilderness in the country – not the other way around,” read a post by Kathryn Louyse. “With that in mind, this zoo (and the city) should be cognizant of why it’s important to protect this space – not destroy it.”

The zoo opposes the alternative plan because it would reduce the number of new amenities to attract more visitors, according to the information provided by Myers. The statement said that steps will be taken to preserve trees and plants in the undeveloped areas under the full plan.

“While we support and encourage all public feedback as part of the environmental impact report process, we do not support Alternative 1 as it prohibits the zoo from increasing its developed acreage to expand animal spaces and increase welfare, as well as address accessibility issues,” read a statement from the zoo. “The zoo has no intentions of simply destroying the undeveloped areas within the zoo, and in fact, will try and incorporate existing vegetation into the projects to the maximum extent feasible. The EIR contains a very detailed Biological Resource Mitigation Monitoring and Reporting Program that specifically addresses mitigating the loss of native vegetation, habitat and special-status species from each phase. This program has to be developed in conjunction with the design of each phase and it must be approved by a city-approved biologist.”

The zoo is located in the 4th District represented by Councilwoman Nithya Raman, who said she has concerns about the proposed expansion.

“We agree that the zoo requires investment and updating,” Raman said in a statement. “We have questions about the scale of the impact on Griffith Park and the natural habitat which we are working with the zoo to address.”

Dan Halden, a spokesman for Councilman Mitch O’Farrell, 13th District, said it is too early for O’Farrell to comment on the proposal because it is not in his district, but added that the councilman is looking forward to reviewing plans once they get to the full City Council.

The Greater Los Angeles Zoo Association, which supports the zoo through fundraising and programs, is also closely monitoring the proposal and will be involved in raising the funding necessary to complete the plan.

“As the Vision Plan evolves, and partnering closely with the Los Angeles Zoo, GLAZA will continue to embrace the public process, engaging in a constructive dialog with our members, donors, partners and the greater Los Angeles community to support the development of a place where we can all explore, learn and grow in nature together,” GLAZA President Tom Jacobson said in a statement. “GLAZA looks forward to raising private and public funding for the zoo’s Vision Plan in order to modernize the zoo’s half-century-old infrastructure. These improvements underscore the zoo’s commitment to its mission to ensure the highest standards of animal welfare by upgrading animal habitats, facilitating guest accessibility and expanding the zoo’s ability to deliver on the Conservation Strategic Plan.”

For information about the zoo’s Vision Plan and to comment on the EIR, visit lazoo.org/about/visionplaneir.