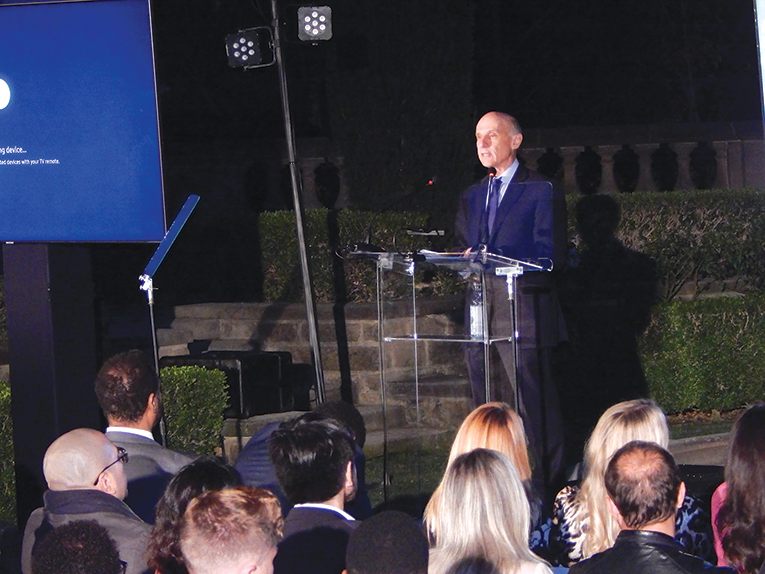 Beverly Hills Mayor Robert Wunderlich outlined his ideas for improving the city during the annual “An Evening with the Mayor.” (photo by Edwin Folven)

Beverly Hills Mayor Robert Wunderlich is encouraged about the city’s future and cited a steady economic recovery and return to pre-pandemic vibrancy during the Beverly Hills Chamber of Commerce’s annual “An Evening with the Mayor” on Oct. 7 at Greystone Mansion.

Wunderlich, who was elected to the Beverly Hills City Council in 2017, has worked as an economic and business consultant for the past 25 years. He began by stressing the importance of family and togetherness and staying united in ensuring Beverly Hills remains on track for steadfast recovery.

“Family is at the core of who we are,” Wunderlich said. “We may be the best-known small city in the world, famous for celebrities, famous for Rodeo Drive, but we are a community. The city has weathered almost two years of a pandemic, economic stresses on businesses and residents, civil discord and demonstrations, and yet, the city is emerging strong.”

Wunderlich said COVID-19 has taken a toll, as approximately 3,500 residents have contracted the coronavirus, and 34 have died. He added that residents have risen to the challenge in significant numbers and gotten vaccinated, and he is proud that approximately 80% of adult residents of Beverly Hills have received vaccinations. He encouraged those who have not to do so as soon as possible.

“The greatest impacts of COVID are the personal ones,” he added. “The most effective actions that we can take to protect ourselves against the current Delta variant, and to reduce the risk of the emergence of other variants, is to take the appropriate safeguards, and that includes getting vaccinated.”

Wunderlich added that the pandemic had a detrimental impact on businesses and city finances, which are primarily driven by property, sales, business and hotel occupancy taxes, which he called “the big four.” From the calendar year 2019 to 2020, the city was down approximately 18% in revenue from the main four sources, but the situation improved slightly from 2020 to 2021, Wunderlich added.

Wunderlich also outlined some of the steps the city has taken to reduce the impact of the pandemic.

“We, as a city, reacted by cutting expenses, through a voluntary early retirement package, through decreases in operating expenses and through decreases in planned capital spending,” he added. “The result is that we’ve managed to continue to invest substantially in the city, increase our spending on police and fire, and provide exceptional services with only a very modest use of reserves. We really are very fortunate that we were in a strong position to be able to do so because of prior commitment [to fiscal sustainability].”

Wunderlich predicted that Beverly Hills’ economy will continue to improve, and the visitors and tourists returning to Rodeo Drive and the city’s hotels signal a comeback. He cited the OpenBH program, which allowed businesses to expand into parking lots and closed streets, as a driving factor in allowing the city to thrive.

“Our OpenBH program in which restaurants and businesses make greater use of public spaces has been a tremendous success. And it should also serve as a lesson on how we can embrace change for the positive,” Wunderlich said. “There was initial resistance to OpenBH. It was only after experiencing the increased vibrancy of our street life that OpenBH was fully embraced. We, as a City Council, are currently discussing the structure and specifics of making this vibrancy a permanent part of our city.”

Wunderlich also said a “village-like” atmosphere is taking shape with more roof-top dining, evening attractions and shopping. The city’s holiday programming, which launches on Nov. 18 on Rodeo Drive, promises to be one of the best ever, he added.

“I expect to see all of you, plus many more, out there,” Wunderlich told the audience. “[There will be] performances on three stages, and just maybe, an appearance by a special guest from the far north.”

The mayor also cited the reimagining of the My Beverly Hills program and credited the chamber of commerce for helping to implement the initiative, which promotes Beverly Hills businesses, incentivizes shopping and draws visitors to the city.

“Distinctive, small businesses are such an important part of the fabric of our city,” Wunderlich said. “With our My Beverly Hills program, we’ll be reaching out to residents and visitors alike [to let them know] that here in Beverly Hills, we have the dining, the shopping, cultural events and more. It says the time for Beverly Hills is now.”

Wunderlich also touted the First Thursdays program, which launched on Oct. 7 and aims to create a vibrant atmosphere in the city’s shopping districts on the first Thursday evenings of each month.

“First Thursdays is an initiative to continue to energize the streets of Beverly Hills, to support our businesses and restaurants, and to have fun,” Wunderlich said. “Participating businesses around the city will provide things such as complimentary items, discounts, extended happy hours, special menus or other attractions. And, we are relaunching a city trolley as the hop on, hop off service at six stops around the city during the First Thursdays evenings.”

Wunderlich also stressed the importance of maintaining a good quality of life for residents and businesses, and top-notch city services. He said the Complete Streets program has made the city more pedestrian and bicycle friendly while improving safety. Wunderlich also said he plans to further examine ways to combat climate change and improve parks and open spaces to promote healthier lifestyles during his term as mayor.

The city of Beverly Hills has also been looking at ways to increase affordable housing, improve infrastructure and schools, and maintain water supplies during an unpredictable and worsening drought, Wunderlich said. The mayor said addressing homelessness also remains a top priority, and the city has implemented programs to provide shelter for anyone living on the streets who will accept it. Wunderlich added that he is focused on making the city better for “a generationally diverse population,” including younger people who are renters and those wishing to move to Beverly Hills to pursue the American dream.

“What is my vision for the future? You can see it in many of the elements that we already have in progress,” Wunderlich said. “I see a city in which building on our advantages, we maintain a strong commercial base, supported by the appeal of our world-class hotels, shopping and restaurants. I see distinctive small businesses supporting the needs of our residents. I see quiet residential neighborhoods providing a high quality of life and attracting cross-generational residents. I see our continued commercial vibrancy, providing the resources to enable the high quality of our police, fire and other city services. I see us as a sophisticated, sustainable village, with the flavor of some of the great European cities, with a vibrant street life, a walkable city core and peaceful residential neighborhoods. I see us achieving this by positioning Beverly Hills for the future, while preserving what we love about the past.”