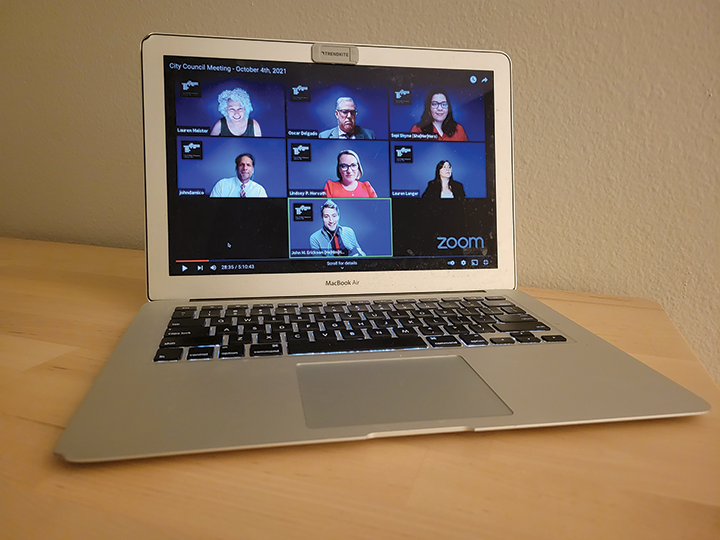 Members of the public will have a choice of attending City Council meetings in person or viewing online during hybrid meetings that begin on Oct. 18. (photo by Brynn Mechem)

Depending on the city’s COVID-19 positivity rate, the West Hollywood City Council could return to council chambers on Oct. 18.

Council members approved a motion on Oct. 4 that would allow the City Council to host hybrid meetings as long as the city’s positivity rate remains below 1.5% in the two weeks leading up to the meeting.

City council members have contemplated returning to an in-person format throughout the year, and were set to return to the chambers in July. However, in the weeks leading up to the meeting, the city’s positivity rate rose to 4.2% and council members agreed to keep meetings in a virtual format.

“I think that Zoom fatigue and also being separated like this has created a lot more disunity, and when people are in person, whether masked or not, it just drops the fences,” Mayor Pro Tempore Sepi Shyne said.

The ordinance approved by the council states that meetings shall resume when the positivity rate is lower than 1.5% for two consecutive weeks, which it has for the past two weeks, according to data from the Los Angeles County Department of Public Health.

Should that number hold, the council will return to board chambers for the first time in 18 months. Most staff will still give presentations on Zoom.

Staff will monitor the daily positivity rate and report to the City Council any changes that would require returning to teleconference meetings.

In considering the return, council members requested guidance from the Los Angeles County Department of Public Health, which has never enacted restrictions on holding public meetings. However, the department still recommends public meetings be held virtually when possible.

Upon their return to council chambers, public attendance will be limited to 25% capacity, or about 40 members of the public who sign up to attend ahead of the meeting. Those who do not sign up or who exceed the capacity limit will still be able to enter the chamber to submit public comment before immediately leaving.

All attendees, including council members, will be socially distanced. Members of the public must submit to a temperature screening and wear a mask before entering the chambers.

Mayor Lauren Meister expressed concerns with the council returning to chambers, stating it could be difficult to understand what council members are saying with their masks on. However, Councilman John Erickson said it is important to resume public access to city officials.

“I’m OK with wearing a mask. I’ll enunciate more, if need be,” he said. “I think it’s important for us to see each other and be around each other. Also, access to the public and being there with limited capacity, I also think is very important.”

Should the hybrid meetings prove unsuccessful, or the city’s positivity rate rise above 1.5%, the council will resume online-only meetings.

For the time being, the city’s 16 other commissions, advisory boards and task forces will remain on a virtual platform. The City Council will return in late November or early December to discuss when those boards might return to in-person meetings.

City Manager David Wilson said the council will need to discuss where the commission meetings could be held. Some board meeting spaces within City Hall and Plummer Park are too small to allow proper social distancing, and council chambers is currently the only meeting location that has the technology necessary to host hybrid meetings.

“We can work on getting technology for the other locations over the next several months, but we likely couldn’t have meetings in other locations until the start of the calendar year,” Wilson said.

Governmental bodies that already meet in council chambers, such as the Planning Commission, could be added within 30 to 45 days, if the City Council’s hybrid meetings prove successful, Wilson said.