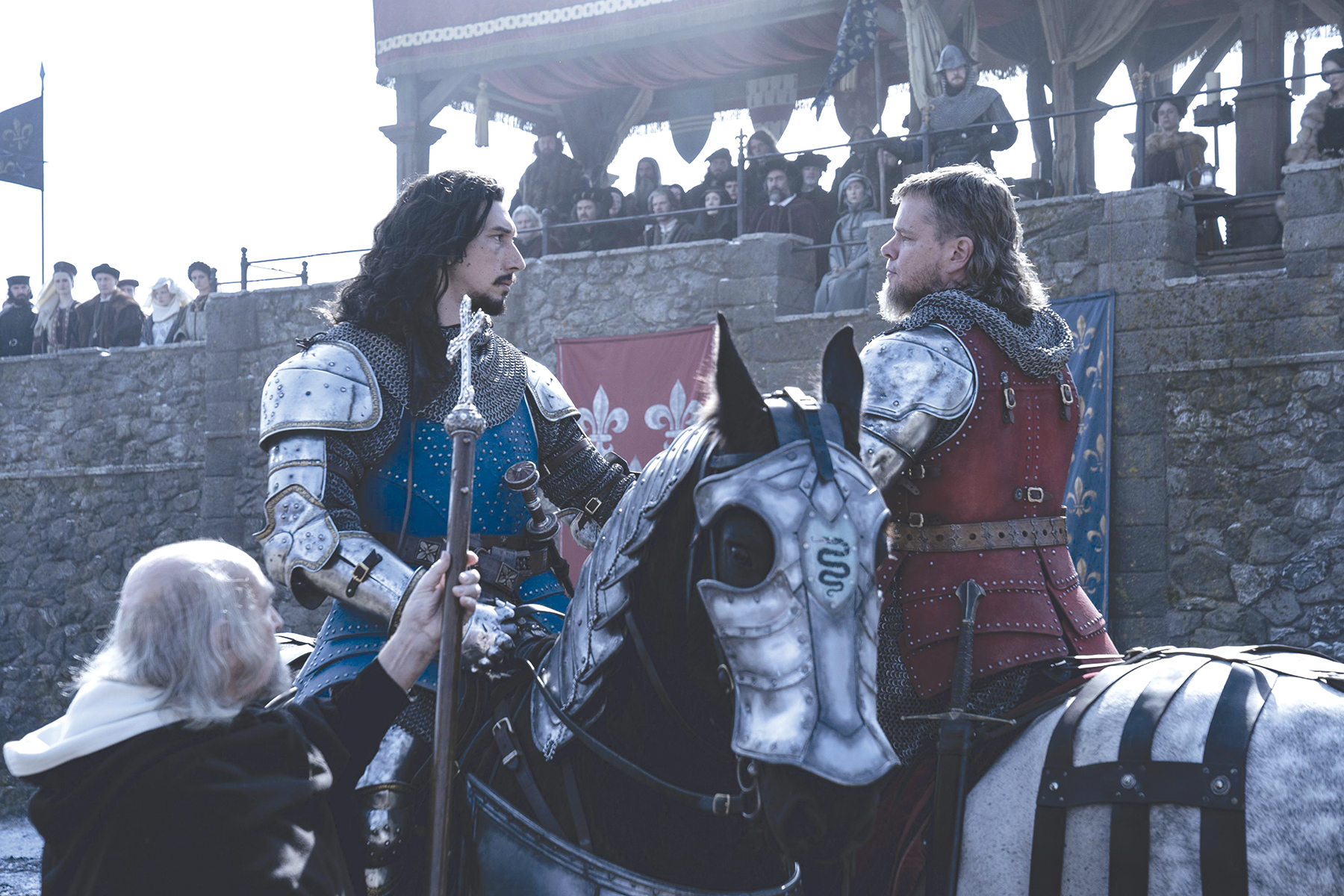 “The Last Duel” hardly flops, though it certainly did at the U.S. box office, earning a measly $4.8 million opening weekend (produced for 20 times that). It ranks somewhere between Scott’s “Kingdom of Heaven” and “Alien: Covenant.” So it’s watchable but hardly top tier.

Scott normally favors a standard chronological story, but “The Last Duel” steals from the Kurosawa playbook, including three chapters that all begin with “the truth according to” Sir Jean de Carrouges, Jacques Le Gris and Marguerite de Carrouges. Up first, Sir Jean de Carrouges (Matt Damon) sports a historically terrible mullet while he drowns in debt and social irrelevance. The family name still holds some cultural currency, but his pride earns him even more enemies.

Then comes Jacques Le Gris (Adam Driver) adorned with luxurious locks that only improved since a few “Star Wars” adventures. He’s best buds with Pierre d’Alençon (Ben Affleck), rocking unnatural blond hair and a goatee to match, and is one of those folks who butts heads with Sir Jean. Jacques’ loyalty to Pierre earns him great favor, including any woman’s attention – at least that’s how he perceives things.

Their stories dominate the first two “truths” leading up to the rape of Marguerite de Carrouges (Jodie Comer), Sir Jean’s wife. For the final act, her “truth” revisits events from her perspective before moving on to the trial and inevitable showdown that will determine the guilty party, a rare legal option at the time in lieu of a traditional court proceeding.

Most of the film sidelines Marguerite as a tactic to represent the Late Middle Ages. Men fancied themselves the only full humans, deeming women mere property, their complaints no more than hysterics. So the story presents that archaic practice first, built into the film’s DNA. The challenge of such a tactic is the transition from that male to female gaze.

It kinda works, especially for a Scott film. He’s hardly the best person to tell this story. His rationale for all-white casting a Moses epic was telling Variety he, “can’t mount a film of this budget, where I have to rely on tax rebates in Spain, and say that my lead actor is Mohammad so-and-so from such-and-such.”

Add to that several of his other female lead films, which hardly end well for women: “Covenant” undercuts its heroine and takes down another from “Prometheus” too, which is unsettling considering the initial care for Ripley in “Alien.” Meanwhile, “Thelma & Louise” is notable but problematic.

Frankly, the best portion of the film likely isn’t thanks to Scott or the other two male screenwriters. Acts one and two, written by Damon and Affleck, feel unnecessarily long as they present deep dives into insufferable characters, especially Sir Jean, who ascends on the battlefield but suffers from a lance up the faulds.

The third act, solely written by Nicole Holofcener, finally gets to the heart of the story, including legal proceedings and the thrilling fight scene. If only the entire 153 minutes could feel as significant as the final act.

On a technical level, the “Rashomon” tactic – splitting the film into chapters – parades as clever, but tedium sets in once the story resets and scenes go on repeat. Films like “Vantage Point” have attempted this before, hoping to present the same scene, the “truth,” with new insights through differing perspectives. That doesn’t happen here. Most feel verbatim, introducing minute additions or mild changes in cinematography that reframe the point of view.

“The Last Duel’s” primary strength revolves around undercutting idealized chivalry. Fighting for a woman’s honor actually endangers the victim – who will be executed in case of defeat – though it only elevates the alleged hero. The whole experience is clunky, more interesting to discuss and web search afterwards than experience on the silver screen.