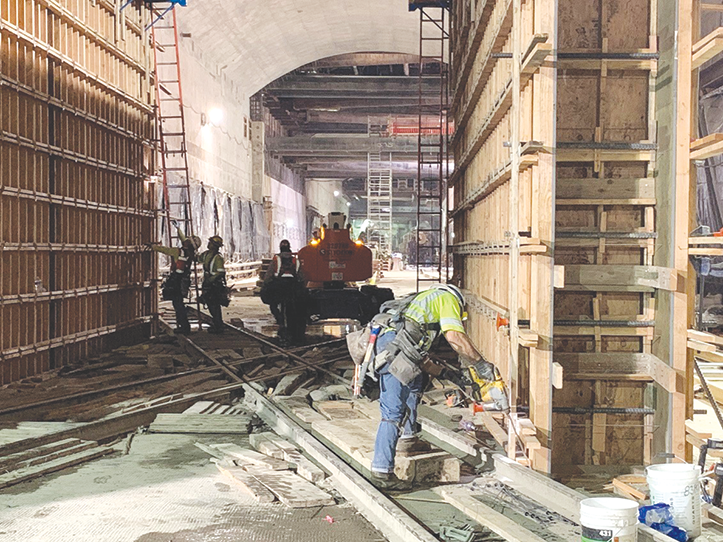 Construction continues on the Purple Line Extension subway project throughout the month, with crews working in many areas from Westwood to Wilshire/Western.

Through Oct. 22, crews will be relocating and upgrading sewer lines and a storm drain on Wilshire Boulevard near Gayley Avenue. The work will be completed in phases and includes demolition and trenching of the existing roadway.

In Century City, crews are excavating and building in the future Century City/Constellation subway station. Intermittent lane closures will be necessary in areas surrounding the construction staging area near Constellation Boulevard and Avenue of the Stars.

Crews are also working on the Wilshire/Rodeo and Wilshire/La Cienega subway stations in Beverly Hills. Ten-foot poles with geotechnical instruments will be temporarily installed on public sidewalks to monitor ground movement and settlement. The poles will be in place for approximately one month before being removed and relocated. The monitoring is expected to take place through late 2022.

Construction for the Wilshire/La Cienega station is ongoing in staging areas on the north side of Wilshire Boulevard and on the street between San Vicente and La Cienega boulevards. Crews are building underground walls, rooms and passageways for the future subway station. The work is expected to last through October 2022 and will require lane reductions on Wilshire Boulevard. Turns onto North Gale Drive and South Tower Drive will be restricted.

Subway work is also ongoing at Wilshire/Fairfax and Wilshire/La Brea, where subway stations will be located near the La Brea Avenue staging areas. Wilshire Boulevard will be intermittently reduced to two lanes in each direction between Detroit Street and Highland Avenue through April 4, 2022. Sycamore Avenue will also be closed immediately south of Wilshire Boulevard.