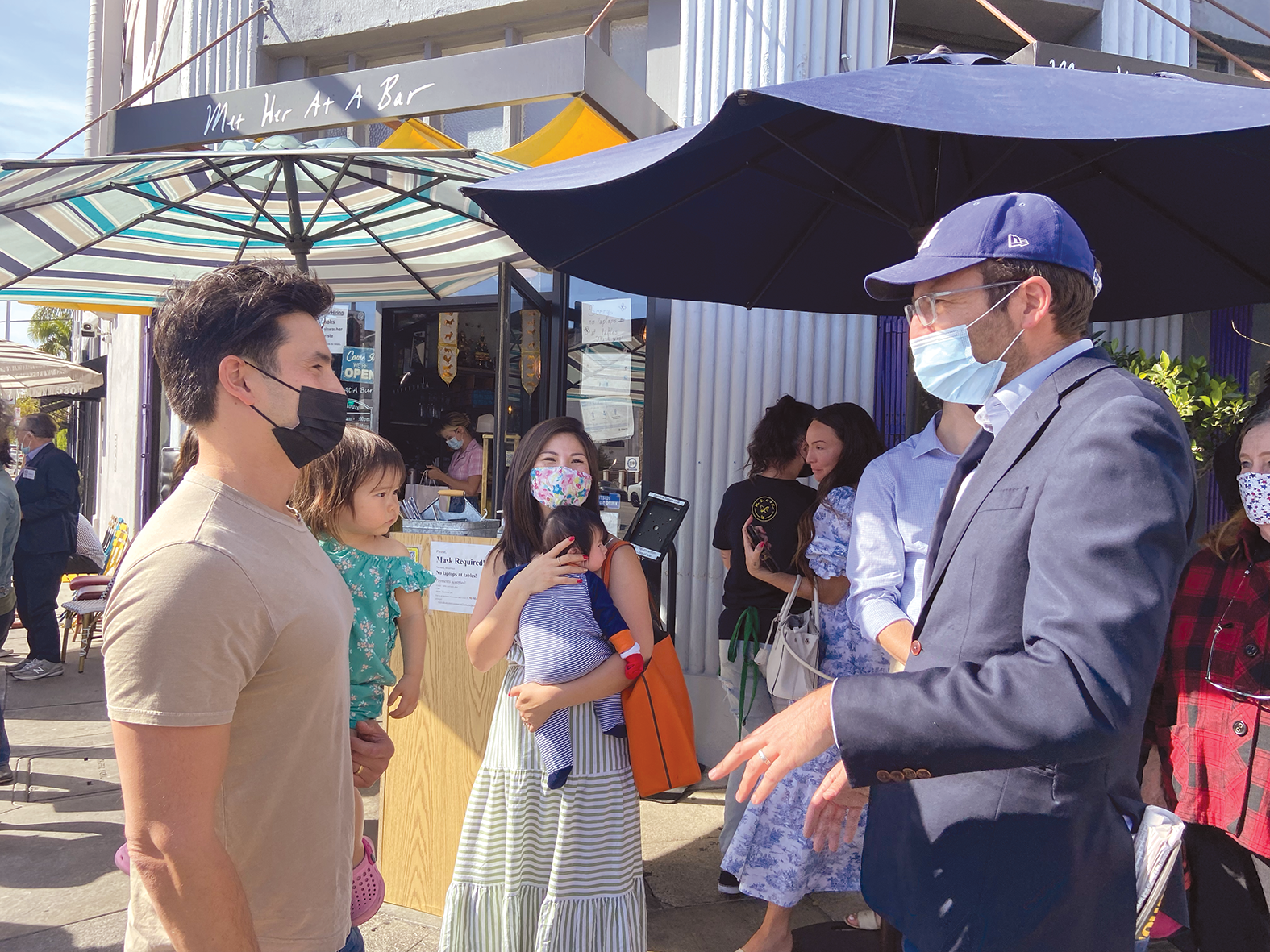 State Sen. Ben Allen, right, met Vincent and Mindy Kinne, owners of Met Her At A Bar café and Met Him At A Bar Pasta, during the neighborhood walk organized by the Greater Miracle Mile Chamber of Commerce. (photo by Edwin Folven)

California Sen. Ben Allen (D-Santa Monica) joined members of the Greater Miracle Mile Chamber of Commerce on Oct. 21 to walk the district, meet local merchants and get a first-hand look at the neighborhood.

The event, organized by the chamber of commerce, allows constituents to get better acquainted with local leaders. The walk was held near Wilshire Boulevard and La Brea Avenue, which Greater Miracle Mile Chamber of Commerce president Steve Kramer said is a neighborhood undergoing a positive transformation.

Allen, Kramer and approximately 20 chamber members and guests visited Candela, Met Her At A Bar and the new All Season Brewing Company located in the renovated former Firestone auto service center at Eighth Street and La Brea Avenue. All three are gathering places that are energizing the community, Kramer said. Other stops on the walk included the Nirvana Studios Hollywood, a photography studio near Eighth Street and La Brea Avenue, and the Luxe Nail and Beauty Spa, near Wilshire Boulevard and Cloverdale Avenue.

“I think it’s important to let people know that elected officials care about the community that elected them, and a really good way of showing that is setting foot on the ground in those neighborhoods,” Kramer said. “I wanted him to see the positive things that are happening.”

Allen said the walk provided an opportunity to learn about places in the district that he has never previously visited. Allen’s 26th California Senate District stretches along the coast from Palos Verdes to the Santa Monica Mountains, and east into Beverly Hills, West Hollywood and the Miracle Mile. He said it is the only state senatorial district in the country that is larger than the corresponding U.S. congressional district for the area, and includes approximately 1 million residents.

“For me, it’s an opportunity to get to see an important part of my district with the folks who make the local economy run,” Allen said. “[I want] a window into what the state of affairs is right now, what sort of challenges they have with government and what we can do to be helpful. For me, it’s about fact finding and information gathering.”

Allen and the group started with a visit to Candela, a Latin-themed bar, restaurant and nightclub at 831 S. La Brea Ave., and Met Her At A Bar, a neighborhood café at 759 S. La Brea Ave. Vincent Kinne and his wife Mindy met with Allen and explained how they struggled during the pandemic, but said business has picked up considerably since indoor dining regulations have been lifted.

“Things were tough, but we were fortunate, and now we are rolling again,” said Kinne, who also owns Met Him At A Bar Pasta restaurant at the southwest corner of Eighth Street and La Brea Avenue. “It’s really cool to meet legislators like him because they are really in tune with what the community wants. I told my wife this is a big deal that a senator came in and talked to us – we’re just the little engine that could. It shows he really cares about the neighborhood and it was great to meet him.”

At All Season Brewing Company, Allen met bartender Chris Mehra, where he enjoyed one of the brews and learned about the historic Streamline Moderne building’s transformation into a brewery.

“It’s cool to know that our senator cares and that he is part of our community,” Mehra added. “We are a part of the community too, so it’s good to meet our representative and know that our interests mean something to him.”

Allen also said he is concerned about larger issues affecting the Miracle Mile, and many other parts of Los Angeles, including homelessness and housing. He said the state Legislature and Gov. Gavin Newsom have allocated more than $12 billion over the last three years to address homelessness, and many projects are currently under construction to provide housing and comprehensive services.

“The state is making unprecedented levels of investment to address the homelessness problem,” Allen added. “It requires money, but it also requires a lot of thoughtful strategic spending. The state is playing its role with a big budget allocation.”

Kramer also pointed out the positive work that has been done to clean up the Miracle Mile and said many agencies are working to make a difference. The city of Los Angeles recently re-implemented its Comprehensive Cleaning and Rapid Engagement program to clean sidewalks and public spaces, and people can call 311 or visit lacitysan.org for information about scheduling a clean-up.

“A lot of positive things have been happening and it’s looking better,” Kramer added.

Allen, who resides in Santa Monica, added that he can’t wait to return during his personal time with family and friends.

“What a great area. I have got to tell you, I am a tourist at heart, and this is an area that has so much to offer. It’s fun to come and visit, come to the restaurants and do a little shopping and just enjoy the area. I encourage everyone to do the same,” Allen added.

The state senator also told the business owners about state grants and programs that provide support for businesses, and encouraged people to contact his district office to see if there are ways he can help.

“A lot of times, it is just seeing what people need and connecting them to the right programs or organizations,” Allen said. “I want people to know our office is here to help people. Any challenge involving state government, don’t hesitate to contact us. We have a really devoted team here in L.A. to make sure we are responsive.”