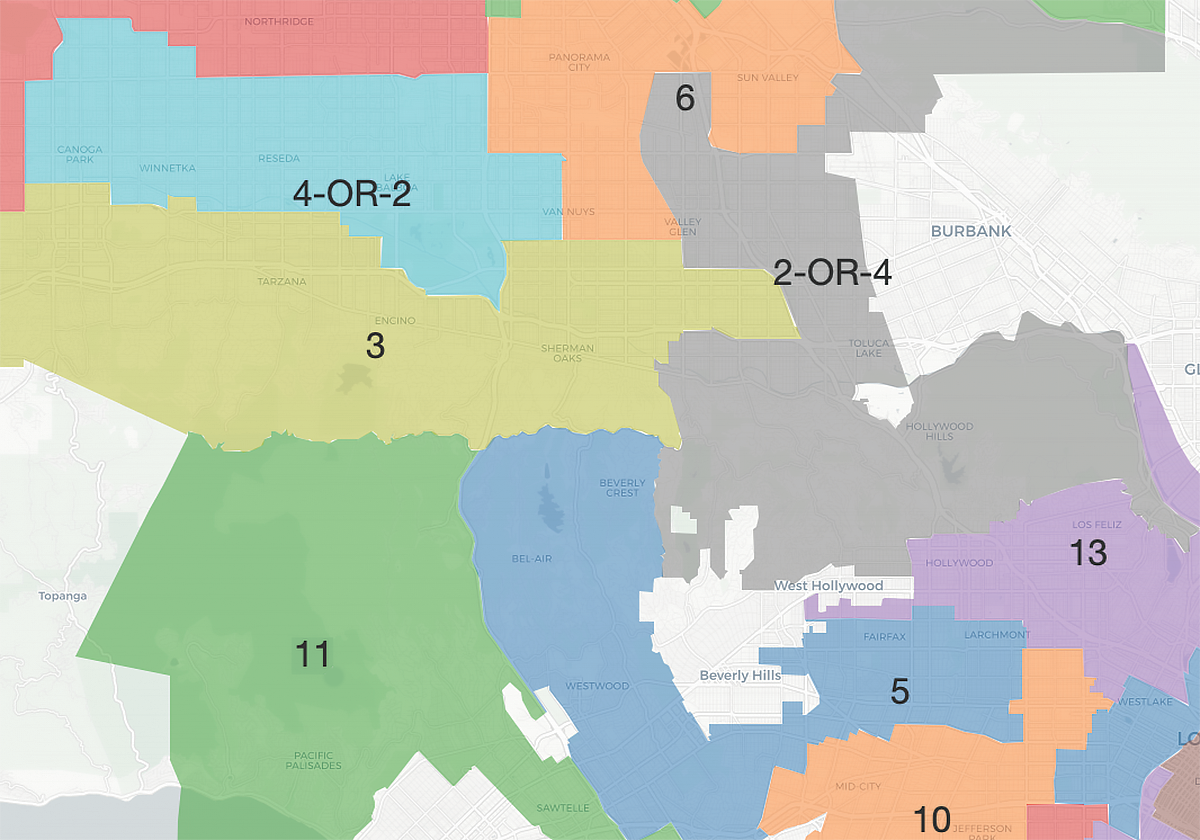 The commission anticipates a finalized map by Oct. 21 and will present it to the City Council on Oct. 29 for review and consideration. Rafael Gonzalez, director of community outreach and engagement for the Los Angeles City Council Redistricting Commission, cautioned that the map released on Sept. 30 may change significantly before it is finalized and presented to the City Council based on further input.

The map released on Sept. 30 has concerned many people, including City Councilmembers Nithya Raman, 4th District, and Paul Krekorian, 2nd District, whose jurisdictions would change dramatically. The redistricting commission proposed major changes to the boundaries of both the 2nd and 4th districts, but stopped short of finalizing which area would be assigned to which council member, instead listing the districts as either “2 or 4” and “4 or 2,” and allowing the City Council to decide who will represent each district.

Major changes to the current 4th District’s boundaries were made, such as removing the Miracle Mile and Hancock Park neighborhoods from the 4th District and placing them in the 5th District, now represented by Councilman Paul Koretz. The map has the southern boundary of the 4th District primarily running along the north side of Melrose Avenue, with the district extending north through Hollywood, and to Shadow Hills in the upper portions of the San Fernando Valley.

The map also potentially places Krekorian’s 2nd District farther west in the San Fernando Valley, stretching from Van Nuys to Canoga Park, instead of the North Hollywood area, where it is currently located.

Raman and Krekorian were not happy about the recommended map, and they plan to continue lobbying for changes.

“The proposed draft map effectively completely erases District 4 as we know it, leaving a district with either 0% of our current residents, or 29% of our current residents, at a time when the minimal increases in census population in Los Angeles shows no basis for such drastic shifts,” Raman said in a statement. “Coming on the heels of an election with historic voter turnout, how can we in good faith encourage people to participate in municipal politics only to wholly discard their votes?”

“The commission was supposed to protect fair and equitable participation by the voters of Los Angeles in selecting their representatives. Instead, this disgraceful plan would disenfranchise hundreds of thousands of voters in the Valley who will have no say in who represents them in the council. It would completely reverse the results of elections that took place just last year. It would disempower voters of Armenian, Korean and other ethnic backgrounds,” Krekorian said in a statement. “I’m confident that the council will reject this absurd set of proposed maps and ensure that all of the people of Los Angeles have a fair opportunity to elect council members of their own choosing.”

In addition to census data, Gonzalez said the recommended map was created based on input from the public and calls for similar communities to be grouped together. The commission potentially altered Krekorian’s 2nd District so an additional council district will be located in the San Fernando Valley, providing more representation for residents, he said. The recommended map places five council districts completely in the Valley, and one includes areas of the San Fernando Valley and the Los Angeles basin (possibly the 4th District).

The southern portion of Raman’s district was altered to group similar neighborhoods together, Gonzalez said. The commission received public input that the neighborhoods of Hancock Park and the Miracle Mile would be better grouped with communities to the west that are currently in the 5th District, he added. The recommended map would extend the 5th District west to Larchmont Village, so it would include the entirety of Hancock Park, which is currently split between the 4th and 5th districts. The 5th District’s western boundary would remain along the San Diego (405) Freeway, but the district would lose territory on its northern end, stopping at the Santa Monica Mountains instead of stretching into Sherman Oaks.

Councilman Mitch O’Farrell, 13th District, said he is monitoring the redistricting process and urged residents to voice concerns at the upcoming meetings.

“I encourage Angelenos, including 13th District constituents, to stay engaged in the redistricting process as it moves forward. There is still a way to go, and public engagement is crucial. It’s important that the commission continues to hear from residents across the city,” O’Farrell said. “I am committed to ensuring that no voters are disenfranchised. Once the commission’s role is complete, I will evaluate the proposed redistricting map with that imperative in my deliberations.”

Koretz, who is termed out next year, declined to comment on the recommended map or proposed changes for the 5th District at this time, but is following the process and will weigh-in when a final map is presented to the City Council, spokeswoman Alison Simard said. The idea behind redistricting is for council members to stay independent at this stage so as to not influence the commission’s work, she added.

Others representing communities that would be included in the 5th District under the proposal had strong opinions. Cindy Chvatal-Keane, president of the Hancock Park Homeowners Association, said it makes sense that Hancock Park would be linked with similar communities to the west. One of the commission’s goals was to place the Jewish community in a single district, she said.

“It’s our desire to be placed in a connected district with other communities of interest,” Chvatal-Keane said, adding that she believes the process for creating a recommended map has been open and transparent. “We have much more in common with the neighborhoods to the west. Hancock Park would be happy to be in Council District 5 as it is laid out in the map.”

Conrad Starr, president of the Greater Wilshire Neighborhood Council, said the council’s position is that it be included within one council district, as is the case with the recommended map, except for a small sliver on the east along Manhattan Place.

“I’m hopeful this was an oversight and they will correct it,” Starr said. “The GWNC’s preferred option is to be unified in one council district. We can live with the status quo of the current council district boundaries. The GWNC is completely opposed, however, to any further splitting of our area, or worse, the introduction of additional council districts to our map.”

Lauren Nichols, president of the Mid City West Neighborhood Council, also said the best option is to have the council in one district. Mid City West is opposed to the current map recommended by the redistricting commission because it splits the neighborhood council between the 4th, 10th and 13th districts. Nichols added that council is encouraging residents to participate in the upcoming virtual meetings to voice concerns.

“Ultimately, we would like to be in one council district,” Nichols said. “Our decision before they introduced this map was to be in one district.”

Steve Kramer, president of the Greater Miracle Mile Chamber of Commerce, said he is still reviewing the new map, but believes the Miracle Mile should be in a single district.

“We would like to have a cohesive Wilshire Boulevard corridor,” Kramer said. “I also think that when someone was elected a year ago, they shouldn’t have their district taken away.”

Some representatives of the Melrose District are also crying foul, as the recommended map places portions of the district north of Melrose Avenue in the 4th or 13th Council districts.

“Common sense says that the Melrose area includes both sides of the street,” read a statement from the Melrose Action Neighborhood Watch. “Should this division happen, we would need to involve two council districts on all issues relating to Melrose. This could be disastrous.”

Gonzalez reiterated that the map will likely change in the coming weeks before it is presented to the City Council, and there is time for people’s voices to be heard.

“You will probably have some modifications. We will do some fine tuning and modifying,” he added. “We want to hear people’s opinions. We have these meetings taking place. We are definitely listening.”