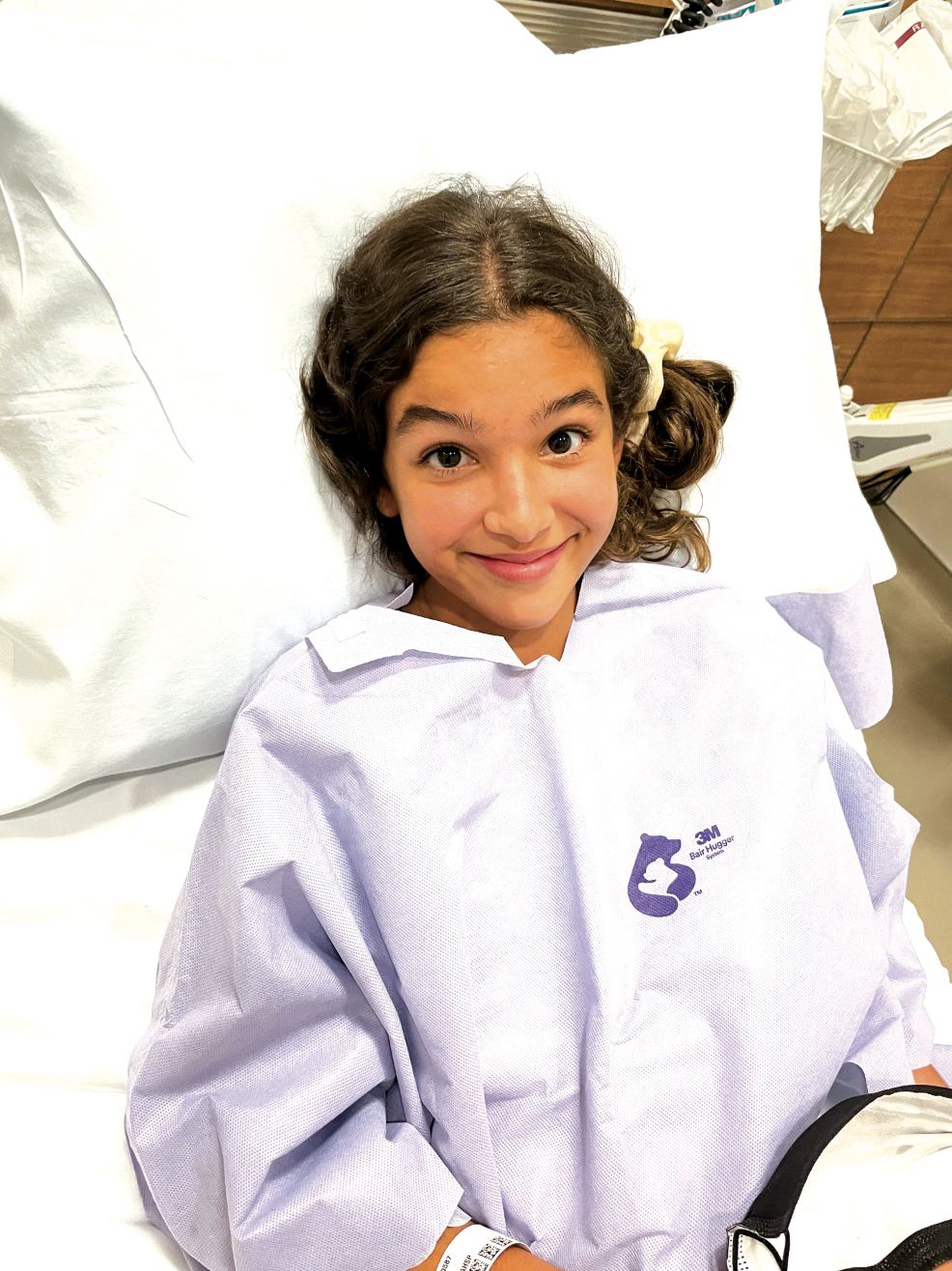 Lalia Susini, a 12-year-old student at Paul Revere Charter Middle School, is an active girl who enjoys soccer, BMX riding and hanging out with friends.

Like most students during the pandemic, she attended school virtually, and found herself needing a break from the computer screen.

She went outside where her grandfather pushed her on a swing set. Suddenly, the swing broke, sending a piece of metal into Susini’s skull.

“I don’t remember falling,” Susini said. “I just remember waking up and lying on the floor while my grandpa and mom kept saying, ‘You’re going to be OK.’”

Susini was rushed to Cedars-Sinai Medical Center’s Ruth and Harry Roman Emergency Department, where she was met by a team of doctors. As one of four Level I adult trauma centers in Los Angeles County, Cedars-Sinai receives the most severely injured trauma patients from throughout the county, according to hospital data.

“The bracket essentially flew into Lalia’s head like a bullet,” said Nicolas Melo, an acute care surgeon and associate professor in the Department of Surgery. “When she arrived at the medical center, her skull was severely fractured, and her brain was exposed. It was a devastating injury, especially for a young child.”

After several blood transfusions and a thorough evaluation, it was clear Susini needed emergency neurosurgery. Within minutes of the decision, Moise Danielpour, director of the Pediatric Neurosurgery program, was performing surgery.

“I remember waking up after and I was confused and more in shock than I was scared,” Susini said. “Everything was a blur, but I just remember how nice and comforting all the nurses and doctors were.”

The traumatic brain injury caused a stroke and complete paralysis on the left side of her body. For the active Hollywood Hills resident, who loves running track and chasing her three brothers around, the prognosis could have been bleak. However, she kept a positive outlook.

For 61 days, Susini remained at Children’s Hospital Los Angeles, where she underwent physical and occupational therapy. A little more than a week after the accident, she began showing the first signs of recovered mobility.

Susini continued healing with inpatient and outpatient rehabilitation for nine months after her discharge. Stacey Susini said her daughter’s focus was always on the things she could accomplish rather than those she could not.

Once Susini had recovered from her initial surgery, Danielpour performed a second surgery to replace the skull defect from her initial injury to better protect her brain during future athletic endeavors.

“We quickly learned from her parents that Lalia was extremely active, often riding BMX bikes, skateboarding, playing competitive soccer and chasing around her three brothers,” he said. “While the initial goal of her surgery was to save her life, our subsequent care was focused on preserving her physical and mental function.”

While again recovering for nearly a month in the hospital, staff went out of their way to play games or paint designs on Susini’s nails.

“I think she preferred some of the nurses over my husband and I,” Stacey Susini said with a chuckle. “It was almost sad to leave Cedars because they became such a part of the family while we were there.”

In November, 13 months after her injury, Susini will receive the green light to return to normal activities, including school, track and her role as young Andy on ABC’s “Station 19.”

“It’s just really exciting to get back to my life because there’s so many things I thought I’d never get to do again,” she said. “So getting to do them makes me so excited, and I’m just really proud of myself.”

Susini hopes to soon begin playing soccer again, something Stacey Susini said she was looking forward to as well.

“I think I’m just now coming out of my shock stage because­­ for so long, all I thought was, ‘That’s my little girl hurting,’” she said. “If that was going to be her reality that she was paralyzed, we would’ve dealt with it, but now that she’s OK, I want to do backflips down Sunset Boulevard, and she’s so much stronger because of this.”

Although returning to school in person is a large feat, Susini is not stopping there. She recently launched her own children’s clothing line called LATE Clothing. She and a friend came up with the idea before she was admitted to the hospital, but while there, Susini made some adjustments to the line.

“When I was in the hospital, I met people who needed clothing to work around a G-tube or a cast or an IV, and there isn’t really that many options,” she said. “So, I decided to add that into my line.”

The first launch of the line completely sold out and Susini has since collaborated with other therapy patients to make adaptable clothing. Susini is donating a portion of sales to Children’s Hospital Los Angeles, and several items in the line are named after the first responders who helped her.

“It’s just really fun thinking up clothes,” Susini said. “And I wanted to give back to the people who helped me so much.”